Review: The Betrayal of Ka (The Transprophetics, Book 1) by Shea Oliver

Thank you, Shea, for getting into contact with me and sending me a copy of your book in exchange for an honest review. 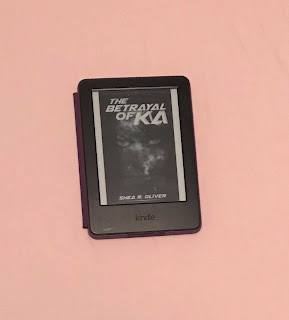 The Betrayal of Ka manages to fit so much with its 265 pages its remarkable. There was quite a bit of set up initially, around the future world, political and corporate structure, and environment. However, once you get past that, you discover a story that is rich with action, and characters you either root for or hate with a passion. There was a lot of political manoeuvring and stepping on of toes and in some ways, this felt a little bit like Hunger Games books.

The Betrayal of Ka touches on politics as well as some of the lesser-used subjects in science fiction and it will kick your butt as it’s well thought out and a solid gritty story and a protagonist who has his share of baggage. Ka is immediately likeable, brash one minute, then adorably insecure the next when talking to a girl he likes. Unfortunately, Ka doesn't make the smartest choices, landing him in a spot of bother.

I found that I had to remind myself that Ka was just a kid who found himself in a very bad situation with some very bad people.  I honestly felt so sorry for him, events that were totally out of his control caused him so much pain both physical and emotional. Being under that kind of stress and pressure can make anyone justify action’s they normally wouldn’t and you must keep that in perspective while reading.

There was plenty of good descriptions, compelling characters and solid action, as well as self-examination on the part of the characters. This book brings up some political issues that are relatable to the real world while at the same time creating a story that is both entertaining and emotion catching.  The writing is well-spoken, entertaining and even humorous at times.

I could easily visualise this world while reading, I especially loved the description of the prison and the procedures that Ka went through. It seems that this book has accomplished everything it set out to do. The future world was well thought out and stayed away from many of the trite views of the future envisioned in many other literary and film works.

As I said at the start this book has so much happened in such a short number of pages that it’s hard to try and convey them without giving to much away and was hard to review. I honestly enjoyed it and have already recommended it to a couple of people I know.