You can blame Mother Goose for this one. Today we are looking at Beverley Allitt, also known as the "Angel of Death". Major warning, she was a child killer. Beverley murderous spree is seen as more shocking because she would intentionally befriend the parents of her victims who entrusted their children into her care. As normal I won’t be going into any of the gory details there isn’t any need for it. I am using an image I have found through google I do not own any rights and am using the image purely for informational purposes (Fair use under the copyright act sections 29 and 30). 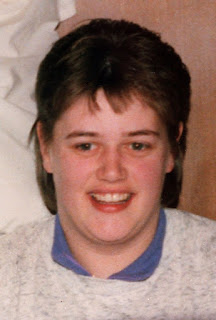 Beverley is a serial killer who was convicted of murdering four children, attempting to murder three other children, and causing grievous bodily harm to a further six children. The crimes were committed over a period of 59 days between February and April 1991 in the children's ward at Grantham and Kesteven Hospital, Lincolnshire, where Beverley was employed as a State Enrolled Nurse.

Let us rewind a little bit... okay more like a lot to her childhood. Beverley, exhibited some worrying tendencies while growing up as one of four children, including wearing bandages and casts over wounds that she would use to draw attention to herself, without allowing the injuries to be examined.

As a teenager, Beverly began spending an excessive amount of time in hospitals with numerous physical complaints. At one point she convinced a surgeon to remove a perfectly healthy appendix which was slow to heal, as she insisted on meddling with the surgical scar. When Beverly grew suspicious of the doctors and thought they knew what she was doing she would move from one doctor to the next, so the doctors couldn’t become too familiar with her attention-seeking behaviours.

First off, I’m not an expert but though morbid curiosity and a fascination with psychology to me Beverley’s behaviour is kind of typical of Munchausen's syndrome.  Sadly, when this behaviour failed to prompt the desired reactions in others, she began to harm others.

In 1987, 18-year-old Allitt left school with just a handful of qualifications, before beginning nurse training at Grantham College. Her bizarre behaviour continued throughout her training while working at a nursing home she was suspected of smearing faeces on the walls.  Her attendance during her training was poor due to her many illnesses and as a result, she failed her nursing examinations and Beverley was the only student nurse who failed to get a job. Also, just a side note it reported Her boyfriend at that time said she was aggressive, manipulative and deceptive, claiming false pregnancies, as well as rape, before the end of the relationship.

After being turned down for positions at several hospitals, she was offered a six-month contract at Grantham & Kesteven Hospital in Lincolnshire. Despite being under-qualified and her history of poor attendance she was taken on at the understaffed hospital in 1991, where she began work on Ward Four, where children were cared for. For several months Beverley appeared to be keen to learn new skills but it didn’t take long before caring turned to killing. There were only two trained nurses on the day-shift and one for nights when she started, which might explain how her vicious, attention-seeking behaviour was concealed for as long as it was.

Fellow medical staff became suspicious after the death of her fourth victim. There were 25 separate “suspicious” episodes where 13 victims identified, four of whom were dead, the only common factor was the presence of Beverley Allitt at every episode. The hospital called in the police after noting the uncommonly high number of cardiac arrests happening in the children’s ward and quickly found that Beverley was the only nurse working at the time of all the attacks. She was immediately suspended from duties as investigators began to examine each individual case.

In May 1993, at Nottingham Crown Court, Beverley received 13 life sentences for the crimes. She is detained at Rampton Secure Hospital.