Thank you, Rob and Andersen Press, for sending me a physical copy of I, Ada: Ada Lovelace: Rebel. Genius. Visionary by Julia Gray for free in exchange for an honest review. 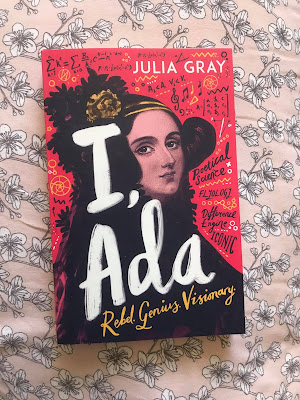 Julia Gray’s I, Ada falls is a beautiful book that lays between a biographical account and fiction. The well-balanced charm of historical facts and fiction, help fleshes out some real-life figures helping create real personalities rather than a boring list of dates and events. The fictional parts were treated respectfully and nothing was out of the realm of possibility which is a credit to the research Julia must have done.

Julia’s portrayal of Ada Lovelace was fantastic, it showed what an unusual life she led. Just a quick history lesson Ada was the daughter of Lord Bryon, and Annabella Millbanke, an accomplished mathematician. She spent much of her childhood being controlled by her mother and this book shows the strained relationship they had in a realistic way. I liked that Lord Byron was included in the story but as an accompaniment and not as a focus point (yes, I am side-eyeing you Mary Shelley movie).

Ada is desperate to learn about her father but whenever he is mentioned her mother closes up and refuses to talk about him. From an early age, Ada is under her mother’s strict control as she is determined that her daughter will stick to mathematics and steer away from poetry so she won’t grow up replicating Bryon’s shortcoming. The contrast between Ada and her mother was great and I enjoyed reading them push against each other. Both are brilliant and clever women, but they both have extremely different personalities and ideas on how best to use their knowledge and education.

The book is divided into three parts from when Ada is age five to nineteen. Ada has a strong sense of who she is throughout and with a quick mind full of ideas, she is a fun and interesting character. Ada has to contend with gossip-based on who she is which in turn has an affect on her mood and behaviour.

Reputation was one of the most important things back in the 19th century so I understand Ada's mother's point of view but I also feel so much sympathy for Ada feeling so controlled. Ada doesn’t appreciate the traditional rules for ladies in the early 19th Century and is more interested in maths, inventions and economics. In a world when females had strict rules to follow this book shows that you don’t have to accept what is expected of us, we can achieve our goals regardless.

Ada was a pioneer of her time and a role model then and for all women today as well as long after her death, she is recognised as the first computer programmer. Ada is recognised as a highly intelligent and strong young girl who tries to prove that females are just as clever and ambitious as men. You may even call her a feminist. However, she is growing up in a time when propriety, marriage and reputation were so important to how women were viewed. It is great to read about such intelligent women just trying to get by in a society ruled by men.

This is a perfect book for young people to read as it is both excellent in its own right to education about Ada but it can also inspire people to believe that anything is possible if they believe in themselves.