I would like to say thank you Harper Teen for sending me an ARC of Star Daughter by Shveta Thakrar for free in exchange for an honest review.

I was sold as soon as I read the main character was half star and half human. Thankfully the book didn’t disappoint. 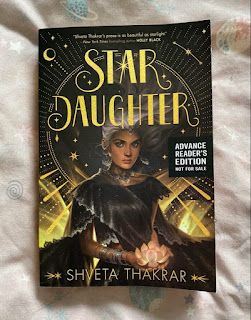 Sheetal has always had to hide her identity as a half-star by dying her silver hair strands and trying to ignore the Starsong that flows through her. But she now has to embrace her star side because she must go to the celestial court to try to save her father after he has fallen ill. When Sheetal arrives at the Celestial Court, she has to take part in a magical competition as a representative for her family and erm no pressure at all but she needs to win.

The discoveries she makes, the secrets that are unravelled, and the ancestry she did not know influence and develop her character to make her a realistic and relatable. Sheetal makes decisions out of desperation and love and her flawed personality makes her easy to understand. Throughout this book, Sheetal can feel her body change and becoming more and more of a star. This reflects her inner struggle with her own identity and being caught between two possibilities. Sheetal feels like she is a lot more than a “normal” human and is done pretending she is lesser, but on the flip side, she feels insecure and like she is not enough when pitted against the beauty and magical standards of other stars.

I'm not an own voices reader or reviewer for this book but what I can say it was a pleasure to learn more about Hindu mythology and the nakshatras. From my perspective, as a none own voice reader I think the inspiration from Hindu mythology is effortlessly woven throughout the book. Nothing in my opinion comes across as forced or there just to be appropriate (I'm not pointing any fingers).

The writing style of this book is beautiful and all the descriptions, of music, setting, food, were stunning. I loved seeing the appreciation for art and all its different forms. Puppeteering and embroidery were just the start of the art forms featured in this book. There is also a slight nod to how much is taken from other cultures under the disguise of the word “muse”. The imagery that Shveta has created in this book is surreal and otherworldly the writing pulls you in and is immersive.

I adore how strong both familial ties and friendship were and I think the book does an amazing job of depicting the complicated a sometimes-messy feeling of being a family. While there is a romantic element to this story, it doesn't overshadows the story or any of the other relationships in the book. None of the characters in this book are perfect, and that's what's so amazing about them and it makes them easy to relate to and gives them an added layer of believability. They betray each other, they lie to each other, but they also love and protect each other.

The book does a wonderful job exploring the themes of legacy, identity and how it's important to own our mistakes and flaws as much as our accomplishments. This book has a little for everyone we have some magic, a splash romance, a sprinkle personal discovery and how important your culture can be. This book is immersive and you can’t help but be in awe at the magical world she has created.