I would like to say thank you to Jason for sending me an ebook copy of Vampires of Portland in exchange for an honest review. Also the cover image is from goodreads this cover is too stunning not to see it in all of its glory. 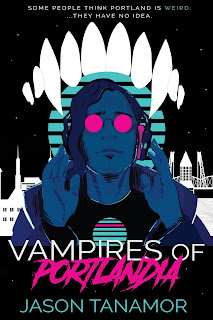 Vampires of Portlandia is an own voice Filipino story that explores the bonds and obligations of being a family while taking the reader on a paranormal joyride full of vampires, shapeshifters, and other wayward characters. The story starts focuses on the matriarch vampire (Marcella Leones) who relocates her family from the Philippines to Portland, Oregon for a better life. Upon Marcella’s death, her grandson and heir Percival, as the eldest of the surviving vampire must put aside his menial job and become a leader by accepting the amulet of power. Percival becomes the leader of ALL aswang breeds nice of Marcella to leave out that tiny detail. His inexperience causes him to learn about the other aswang breeds when the aswang covenant is broken.

Percival and his family are trying to survive in everyday Portland, without bringing attention to themselves, as vampires. It's hard to feel safe though however when a series of grisly murders occur, and it becomes clear that these acts are not being committed by humans. Percival must act quickly to protect his family and their legacy before it's too late. If that isn’t enough for poor Percival it's up to him to keep the family together and keep their thirst under control.

Along the way, we meet different supernatural beings. The other four clans mentioned in this book include the witches (mangkukulam or mambabarang), ghouls, viscera (manananggal), and werebeasts. Each of the group has a leader that makes sure that the clan members follow the covenant, an age-old agreement given by the Gods for the aswang to live in harmony. As always along comes one individual who believes they should no longer follow the covenant written by the God Asuang but take control of the world in which they now live. Which sets in motion the supernatural community heading to a potential civil war.

Personally, I enjoyed the Filipino culture represented in this book and reading this book made me do my own research on the Aswang. Which for me is a tell-tale sign of a good book. One of my favourite aspects of the story were the Filipino values and culture was always at the heart of the story. I also liked how Jason wasn’t afraid to talk on political issues in the Philippines. The depiction of grief in this story was real and showed how that nasty beast can take many forms and how the weight of grief can feel when you’re trying to carry it alone.

As a whole, Vampires of Portlandia left me with chills down my spine, folklore to research, and resonating themes about family, acceptance, and open-mindedness to contemplate. Jason skilfully combines Filipino cultural lore with the modern-day Portland. If you like urban fantasy and mythical folklore and dark suspense, this is the book for you.