My old laptop sadly went to silicon heaven (If you get the refence we should be buddies) back in December and I got a new that can game which means I am finally gaming again. Not going to lie with being stuck inside again with the Idiopathic Anaphylaxis I spent a week solid gaming for the first time since I was 18. 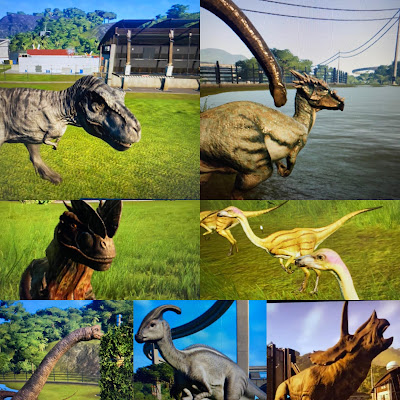 So, what was the first game I sat and binged was it something I loved like left for dead or alien vs predator oh no it was Jurassic Park Evolution. Fun fact I am the same age as the orginal Jurassic Park. I have a confession Zoo Tycoon was one of my favourite games growing up. I wasn’t so much interested in caring for the animals, but more having a battle to death with all the animals and guests. Don’t judge me you probably did it too.

As soon as you launch the game you are greeted by the familiar voice of Jeff Goldblum reprising his role as Dr. Ian Malcolm. Several other cast members return to voice their chracter, but their presence only emphasizes the absence of Chris Pratt. Don’t get me wrong the voice actor who has taken over the line’s is good but it’s just off.

The central part of this game is working to unlock islands and grind out dinosaur genomes. Each island presents a different test and starts you out with nothing or even less than that. One thing I will be brutally honest is raising, lowering ground levels or adding. removing water or forests to the terrain gets annoying at times yes it doesn’t cost a lot of money, but it gets tedious I’m sorry.

There are 42 different dinosaur species available in the base game. Plus 9 DLCS that added extra dinosaurs and in game content. Just like the Jurassic world movies in this game you can also change the dinosaurs themselves by altering their genomes at the risk of making them harder to incubate. NOT AN AD!!! But steam did a good deal on the DLCs over the new year, and I ended up getting Deluxe, Carnivore, Cretaceous, Herbivore and obviously I had to get Return to Jurassic Park for around £11. I picked up the game for 99p the year before I was gutted, I didn’t check if my old laptop could actually play it.

Stay with me so you know in the orginal Jurassic Park when they first arrive, and you see the brachiosaurus I have felt that excitement each time I have hatched a dinosaur.  Some people may find it a little boring, but I love that each time you hatch a Dino from the Hammond Lab you get a zoom in of its release.  I must have hatched around 10 T-Rex’s and I get just as excited as the first time I hatched one in game. I have really enjoyed watching everything from watching the gallimimus to the brachiosaurus roam around the screen making movie-authentic noises is great.

If you can’t tell I have loved this game, I mean what isn’t to love other than the island terrains but first world problems. If you love the Jurassic park franchise you should try this game out even if its too get you excited for Jurassic World: Dominion. Bonus photo thank you Rexy..... 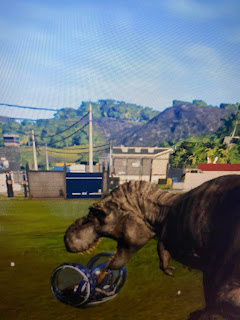