To kick off crime week I have one of my favourite crime books Gone Girl. This is your spoiler alert for both the book and the film. I am using cover images I have found through google I do not own any rights and am using the image purely for future review purposes (Fair use under the copyright act sections 29 and 30 under use for a review). 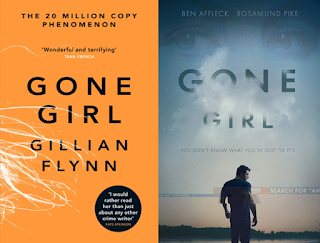 Just a little heads up if you are wanting to read any of Gillian Flynn's books, they are dark and filled with violence, so if that's not your thing, she possibly isn’t an author for you. I read Gone Girl on kindle but when I saw a Gillian Flynn book boxset, I picked it up and enjoyed not only rereading Gone Girl, but I got to read Sharp Objects and Dark Places. Just a little tease of a spoiler Gillian Flynn has a talent for writing utterly unlikable and crafty women.

The book has a brilliant plot, and it’s very hard to put the book down its addictive. The story is split into two parts, the first half is all about the investigation into Amy's disappearance, the airing of Nick's dirty laundry and recollecting the troubled marriage between Nick and Amy. Then in storms the second part, with its mischievous twist and turns. The story became more exciting, and almost unhinged. There is a lot of room for speculation and as a reader you can expect the unexpected as the main characters reveal sides to them that are shocking. Reading this book is an emotional roller coaster even during a reread it’s hard to put down it sucks you back into the story so easily.

In the movie, Nick proposes to Amy while at a book party for her parents’ latest Amazing Amy book. It’s a charming scene and the soppy moment almost melted my ice-cold heart, but it’s not in the book their engagement isn’t really mentioned at all. The film does include both of Amy’s exes Tommy O’Hara and Desi Collings, however there is no mention of Amy’s female stalker, Hilary Handy. Hilary’s fascination with Amy and existence has been removed from the film completely, making it appear that Amy only has issues with the men in her life. In the book I think Hilary’s existence gives an interesting insight into Amy and it helps show how complicated the reality of the situation is.

The movie skips Andie and Nick's breakup scene which destroys the logic of Andie’s press conference it just happens in the film. I filled in the blank with what I knew from the book, but a friend pointed out it was a little irrelevant to pop up and “sell her story” till I filled her in on what happens in the book. In the book, Nick breaks up with his mistress because his lawyer, Tanner Bolt, tells him to. Andie responds to the breakup by biting Nick and it’s that confrontation that acts as a trigger for Andie to hold a press conference and reveal their affair.

I hope you’ve enjoyed my little comparison of the book and film. What did you think of Gone Girl?