The Rings of Power Review

So that’s it the first season of The Rings of Power (RoP) is done. This is going to be such a contradicting post heads up. Spoilers!!! Did I enjoyed RoP yes, did I think it was a little slow at points yes. Did I enjoy the series as a whole yes, but did I like the final episode no. If there’s a second series, will I watch it despite all this yes probably. Buckle up dear reader there is a lot to unpack here.

I am using a poster image I have found through google I do not own any rights and am using the image purely for future review purposes (Fair use under the copyright act sections 29 and 30 under use for a review). 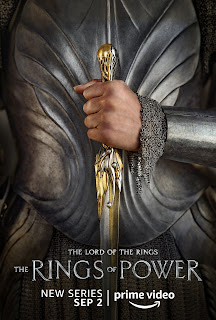 I can’t say I didn’t like RoP as since the series started, I have reread The Hobbit and The Lord of the Rings books. It might be selfish, and I might be trivial, but I just wanted a little bit more. This season has been a slow burning build up filled with fan theories and speculation that I have enjoyed but at times I just wanted a bit more. It was like a dirty little tease with no real surprise. I had more fun discussing theories with people than the real revelations.

There is no point in me telling you the identity of Sauron. If you watched the series, you know who it is. In fact, like and my cousin and I, you probably worked it out within the first three maybe four episodes. It wasn’t a big surprise there was no shock factor.

There were some great parts during this series that I loved. I adored the tangent that followed Elrond and Durin it was great to see the real friendship with issues that might actually be faced like your elf friend forgetting 20 years is a long time to you. It was also great to see Khazad-dûm in its prime, learning about the Balrog and seeing the legend behind Mithril. I appreciated seeing warrior Queen Galadriel she was a badass and it was great to see.

I wouldn’t go as far as saying it fails as an adaptation, I would say it’s a long long-lost cousin who turns up drunk to family functions and no one really knows how they are related to the family. Ultimately, RoP is technically just a really, really expensive fan fiction. It turns out they only had the rights to The Fellowship of the Ring, The Two Towers, The Return of the King, the appendices, and The Hobbit and that was it. As they didn’t have the rights to The Silmarillion, Unfinished Tales, The History of Middle Earth they couldn’t use any of the lore.

I remember reading when this series was announced that pretty much had full reign to do whatever they wanted as long as they didn’t contradict something they didn’t have the rights which sounds pretty simple but here we are. They had a lot of leeway and a chance to add depth to what we already knew.

Come on the opening of The Lord of the Rings gave you the bloody first season. “It began with the forging of the Great Rings. Three were given to the Elves, immortal, wisest and fairest of all beings. Seven to the Dwarf-Lords, great miners, and craftsmen of the mountain halls. And nine, nine rings were gifted to the race of Men, who above all else desire power.” This is what we were promised the first season is finished and we have been shown Númenor, which is not one of the Nine realms of men for the rings. We also weren’t shown the other six Dwarven lords.

One thing that has made me pull my hair out a bit is that this series is called RINGS of power. RINGS. Like you know it’s in the name guys!! In the last episode we spend a whole fifteen minutes on the forging of the Rings, which is done out of order and as an afterthought AND no rings for the Seven Dwarf-Lords and the Nine for men.