The Beast's Heart by Leife Shallcross

Thank you NetGalley for the chance to read this ebook (published 03 May 2018) for free in exchange for an honest review.

TRIGGER WARNINGS: There are some troubling themes. Suicide is attempted and talked about more than once. Abuse is also mentioned. 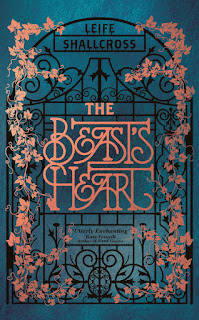 Leife Shallcross has created a beautifully enchanting world that is easy to imagine and jumps off the page. I adore the backstory and the story itself is wonderfully detailed and complex and I was unable to put my copy down I read this book in two sessions (only split because I prepared tea). Soft spoilers there were a couple of scenes I almost sprung a leak a little welled up but no leak.

I’m relatively familiar with most of the popular telling’s and re-tellings of Beauty and the Beast. The story itself is uplifting there are plenty of smiles, laughs and jokes amongst the gloom which in my opinion is well balanced throughout the book. I found the language used is lovely but could be a little slow in some ways. Not in a bad dragging way, just not rushed by taking the time to tell the story.

There is no mention of dancing or talking furniture or narcissistic noblemen demanding the damsels hand in marriage here (looking at you Mr Disney), just a lonely heartbroken creature trying to preserve his humanity in a decaying castle that’s half prison, half his former home. Before we get all judgy judgy and shame the beast let’s take a minute to imagine spending all those years roaming the forest losing your humanity whilst never knowing how the curse could be broken. I'm sure you would become downhearted and ill-tempered too.

The story starts with us seeing how the beast has been alone with nothing but his own company for far too long. It is made very clear the Beast has forgotten his former, human self. After living in the forest that surrounds his long-abandoned home and intimidates the other creatures that live there. His recurring vivid dreams torment him, often confusing his perception of what is real and what he has dreamt.

When we see Isabeau’s (Beauty) father stumble upon his home, we see that all he really wants is companionship after centuries of isolation. Obviously, the usual trick occurs where the Beast gets Isabeau to come to the castle, it is refreshing too have this told from the beast’s perspective and that he would never have acted on any of the threats he made.  There is even genuine remorse in the way he acts at times, furthermore ensuring that we truly see that the beast has retained some of his humanity despite his doubts.

Its good read for someone looking for another insight into ‘The tale as old as time’ I enjoyed the book but I like most retellings as I usually have a soft spot for the originals (yes that does include really bad Dracula remakes). As mentioned above I read the book in a day and enjoyed it, in my opinion worth the read.