The Handmaids Tale by Margaret Atwood

I’ve tried to do a spoiler free review but there may be some spoilers that have snuck through but there are definitely spoilers in the bottom part of the post comparing the tv series to the book.

This review is a back date of The Handmaids Tale as I read the book last year after watching the tv show (I know it’s the wrong way around). In the world of this book The United States of America’s political and social structure has crumbled, the president was murdered and an all-powerful, Christian fundamentalist army has imposed a terrifying new order on its citizens and the Republic of Gilead was formed and the country’s borders have been shut ever since.

The story is not only a terrifying vision of male-controlled oppression, but it is also a story of rebellion and the reliance of the human spirit. The women of this books worlds are the main target of the regime’s brutality. Their rights and personal freedoms have been abolished and they are no longer allowed to work, to own assets or to be in relationships not sanctioned by the state.

To add insult to injury woman are now categorised according to marital status and reproductive ability. The categorises are Wives, married to Commanders, the founders and shapers of the new regime; Econowives, the spouses of lower ranking men; Marthas, too old to have children and now domestic slaves; Aunts, the regime’s propagandists and enforcers; or Handmaids, the fertile and are forced to bear children for officials.

The book tells the story of Offred (“Of-Fred”), she is a Handmaid, the property of the Commander who she is given too. Offred is careful not to give much away and we know very little else about her. Offred is on her second placement as a Handmaid, she knows that if this assignment fails she has one more go before she is declared invalid and shipped off to the Colonies to clean up toxic waste along with the other women that Gilead considers useless or dangerous.

Offred’s days are spent running errands in stripped back to the basic shops where the goods are labelled with pictures (because women should not read), or sitting quietly in a bedroom with shatterproof windows.

On “ceremony” nights, she mechanically copulates with the Commander while lying in the lap of his infertile wife, Serena Joy. The ritual, is borrowed from the biblical story that emphasises that Offred is nothing more than a womb.

As the novel concludes, with Offred being taken away by the secret police, the Eyes of God, known informally as "the Eyes". Before she is put in the large black van Offred is unsure if leaving will result in her escape or her capture. She enters the van with her future uncertain and That’s it.

The TV series
STOP!!
Now if you don’t wish to have any spoilers 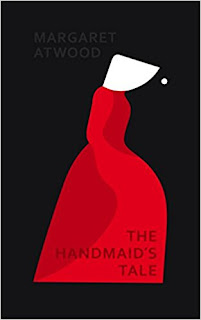 The plot of the story has been slightly adjusted and padded out a little, but i think they have captured the essence of the book in its brutal reality. Certainly worth a watch and season two has started airing in america (I'll have to wait a little longer) and is a perfect excuse to binge watch season one.

The show has updated itself to reflect the current times. One of the main big changes is that Offred reveals her name to be June and is no longer shown as being a passive bystander. When the government starts to take away the rights of women June and her friends take to the streets to participate in women’s marches.

Offred’s backstory is also more extensive than it is in the book. There are flashback scenes that give the audience insight into how Gilead came to be: The slut-shaming of June and Moira on their run hints at the growth of sexism across the country and has no in-book equivalent.

They also change round a crucial scene in more horrific manner in my opinion in the book June’s baby is briefly abducted in a grocery store at 11 months old. While in the tv series A woman steals June’s baby not long after she been born from the maternity ward demonstrates the real consequences of the current fertility crisis.

I’ll add this bit here under the spoiler warning.  I found the ending stupidly annoying it doesn’t provide a definitive answer about its Offred’s fate (I like endings what can I say).  Which set my mind racing like was is she okay or is this it for her. So, I am actually really excited to see season two to see where Offred’s story will go.