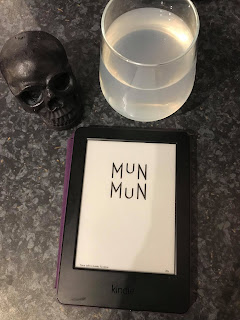 In an alternate reality in a world a lot like our own, each person's physical size is directly proportional to their wealth (the so-called munmun). The poorest of the poor (littlepoor) are the size of rats, and billionaires are the size of skyscrapers and shows the implications of how easy or difficult an individual’s life will be. By equating wealth with body size, Jesse recreates the feeling of being subjected to the cruelty of poverty by making a world where wealth is shown in size is easy to picture and a frightening alternate reality. The way Jesse plays around with word and blunt dialogue is refreshing and I think it will keep a readers’ interest and attention.

I really enjoyed this book after watching Downsizing I have been a little fascinated by being that tiny then I remember at my current size I can’t reach the top shelf and it annoys me. I will mention that there are sexual situations and adult content in this book but with that being said it’s also a pretty wacky fantasy world that includes a lot of made-up words.

The story is told by Warner, a littlepoor which means worrying about things that no one else even thinks about being stepped on or a cat attack. Warner is a fourteen-year-old who is trying to help his family and will do anything for them.  The world is built for the average (middle income) population, not the super poor. This means that there is no easy access to hospitals or schools as the littlepoor are too small and food and transportation is difficult to find. There aren’t many well-paying jobs for these littlepoor’s, making it near impossible to scale up in the world. Bankers Scale Up those who’ve acquired wealth and Scale Down those who’ve lost or relinquished it.

Jesse takes a variety of hard-hitting topics and writes them so wonderfully that he remains sensitive but doesn’t pull any punches. The running themes throughout this book focus on people’s fixation on wealth, family and trying to rise above in a world that’s against you. It is a story that allows us to look through the looking glass in the safety of our imagination and it's easy to picture our reality being similar.  Munmmun also looks into poverty and the book delves into how the legal system treats minorities. For example, when a group of middle-rich teens go on a rampage and destroy property, they are "just kids" letting off steam and are given a slap on the wrist in spite of devastating the lives of the littlepoor.