Smile of the Wolf by Tim Leach 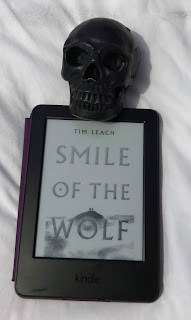 This is not a soft and fluffy book, but it is still deeply moving. This book has all the ingredients of an epic saga: betrayal, exile, feuds, fights, honour-killings and love. The book is set in Iceland during the 11th century. Tim dramatically creates the diverse landscapes of this island and its reliant and proud people.  Eleventh-century Iceland is a harsh, unforgiving place and the Viking age has come to an end.

This book pays homage to the Historical Fiction genre with excellent results. It shows the beauty of Iceland, the culture and convictions of a bygone era that still continues to fascinate us, providing an endless source of inspiration for stories like the one Tim Leach created.

Gunnar, a warrior and a family man, has had to adjust to the conditions of an uninviting but magnificent land. Kjaran, a poet, a bard that lives on the hospitality of others, is his loyal friend Kjaran is the narrator, using his story-telling skills to bring people to life and describe events and surroundings. When the two men find themselves in a web of treachery that has nothing to do with them. Tim tells the tale of his two heroes placing their profound friendship at the novel’s emotional core.

One night, in the gloom of Iceland’s winter two men: Kjaran a poet, singer (or skald), who sings in exchange for food and shelter, and Gunnar, an ex-warrior, now a father and farmer. One night the pair set out to hunt a ghost as they believe that ghosts are not shadow and air but walking flesh. Instead, they kill a farmer. Kjaran and Gunnar were outlawed by the people after choosing between hiding their deeds or confessing their crimes to the family and paying for them. Under Icelandic law, they should pay the man’s family a blood-price, but instead, they try to hide the murder, but their decision leads to a brutal feud. One of the men is outlawed, the other can be legally hunted down by the victim’s family to avenge the man’s death.

This is a novel where the atmosphere of the book is significant, it’s part of appreciating the difficulty of surviving in a hostile environment. Who will survive, and at what cost? I loved every minute of this book and it honestly made me want to jump on a plane and visit Iceland and jump into the books world.