The ocean is not our territory - it's theirs. 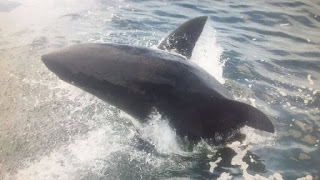 If you have come over from my twitter or Instagram you know that I am a little bit excited for Shark Week, this year I have the added bonus of NatGeoWild having SharkFest the week before. You can think I’m crazy but I love sharks and would love the opportunity to go in a cage dive (I’m saving). Shout out to my wonderfully wild friend Amy for the photos.

I love great whites I may even go as far to say they are beautiful and majestic, I could honestly watch them swim for ages.  Given the Great Whites reputation as the “killer” and most “violent” shark, I am more concerned about the Bull shark or Cookie Cutter shark. The bull shark is commonly found worldwide in coastal areas of warm oceans and can be found in freshwater rivers and lakes.

I get that Sharks can be seen as kind of scary because in the water they're faster than us, can appear from nowhere in an instant. If you find yourself swimming in the ocean or even some rivers you’re probably nearer to sharks than you realize don’t forget it’s their home. With millions upon millions of beach-goers and surfers taking to the water every day, only a small handful are ever bitten or killed by sharks. 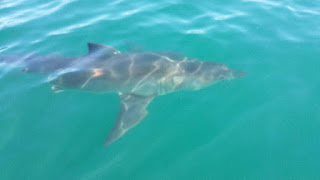 It honestly breaks my heart a little that such a beautiful and misunderstood creature is stigmatised I think the shark overall imaged needs a little positive PR. Even Peter Benchley the writer of Jaws in the last decade of his career wrote non-fiction works about the sea and about sharks advocating their conservation to help a post-Jaws public to more fully understand the sea in all its beauty, mystery and power. Benchley’s book Shark Trouble demonstrates how hype and news scandals can help destabilise the public's need to understand marine ecosystems and the potential negative consequences as humans interact with it. In his later books, humans seem to have become the aggressor in our relationship with sharks, acting out of ignorance and greed as several of the species become increasingly threatened by overfishing. In light of Peter Benchley's lifelong record of shark conservation and educating the public about sharks, the Peter Benchley Ocean Awards have been established as his legacy.

Sharks may look scary and occasionally an encounter with them can be fatal but on average, only five out of 70 to 100 attacks result in death while coconuts kill 150 people each year worldwide ad hippos kill 2,900.

Why are sharks becoming endangered?

Demand for Shark fin
The growing demand and trade in shark fins which are often used to make an expensive Asian soup has become a serious threat to many shark species. This practice is non-discriminatory again sharks and affects many different shark species, including whale sharks.

Overfishing
The overfishing of sharks happens because of the huge demand mainly for shark fins and a lack of management to ensure shark fisheries are sustainable. Some species, such as the spiny dogfish is targeted primarily for its meat.

Bycatch
Sharks are often caught incidentally by fishing gear set for other types of fish such as tuna longlines, trawls and seine nets and many will simply be discarded. 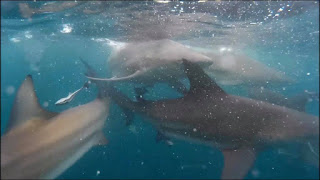