Out of the Blu by Vitali Vitaliev

Thank you, Francesca, for sending me a copy of this book for free in exchange for an honest review
Spoilers 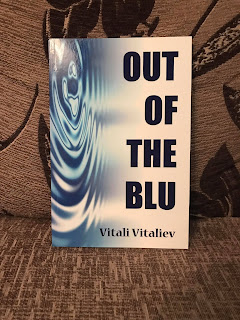 Out of the Blu is a light-hearted unique alternative universes story with a little bit of fringe science with some funny spaceballzesk sci-fi thrown in. If you liked Neil Gaiman's Coraline and Darren Shan's Demonata, I think you will enjoy this. While the idea of the alternative universe is not exactly new and can be seen as slightly overdone I loved how Vitali, takes on the genre and makes it unique and unlike anything I have read before. Vitali decides on an alternative universe where the couples actually end up in a universe that doesn’t belong to either of them.

Unlike what I have seen in other Sci-fi mediums these people are not highly trained scientists and have absolutely no idea what they're doing I think this made it a little more realistic and I could relate a little more to the characters. the book jumps from hilarious, as everyone’s tries to understand where they are, to the quite serious when they are all trying to work out how the situation was even plausible its wonderful done once the humour of being in the wrong universe wears off.

Then we meet the Ks and the Cs both the couples look and sound alike, they have very similar names and were living similar lives. With The K’s, Viktor is the reader, the highbrow tourist seeking culture, while Katherine is the sun-worshipper, soaking up the beauty of the beach. While The C’s, this is reversed, and Catherine is the one who visits historic ruins while Victor lounges on the seaside. After a turbulent flight, the Cs could not be happier to be back relaxing in the comforts of home. Imagine returning home to find identical Volvo parked in front of your house, and even worse, finding an exact copy of yourself inside. The real fun begins when they try to replicate the circumstances that led to the switching of universes.
One of the funniest parts of the story is how the Ks and the Cs discover the differences between their home and this strange new reality: all the spellings are wrong, for example, “Ambulence” rather than “Ambulance”.  As quickly as possible, they try to find a way to return to their respective realities.

Little shout out for Vitali for doing his research on quantum theory and the mathematical and scientific theories surrounding the science of the “impossible”. Vitali’s writing style is quite explanatory which is helpful given the complex science behind this books and I honestly didn’t mind.