I was recommended this book series by my friend while we were still at school and I loved it. She reread them recently and I thought I would join her then we realised I was missing betrayed which I then borrowed off her. I love how the Cast’s have infused the vampire genre with their own unique twist. This is one of my series that bother me because I have some on paperback and some hardback. 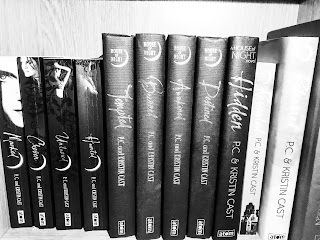 House of Night is a series that follows the adventures of Zoey Redbird, a fifteen-year-old girl who has just become a "fledgling vampyre" and is required to attend the House of Night boarding school in Tulsa, Oklahoma.

Zoey Redbird finds herself marked as a vampire in the middle of the hallway one afternoon at school. Aside from the total abject humiliation of having an outline of a blue crescent moon appear on her forehead after some tall-dark-and-weird dude announces she is one of the marked, Zoey also has to deal with faster-than-instant-pudding ostracization from her peers. More pressing, if Zoey didn’t get herself over to the House of Night, a boarding school/incubator for fledgling vampires, she was going to die. If a fledgling is not in constant proximity to adult vampyres, the fledgling will die; so the fledglings rarely leave the school. About one in ten fledglings die anyway since their bodies cannot tolerate the Change.

Fledglings are marked by a sapphire blue crescent-shaped outline on their foreheads; when they become full-fledged vampires, this mark becomes solid and they receive more tattoos which extend (these usually represent some personality aspect; for instance, Zoey's equestrian teacher, Lenobia, has tattoos that look like horses.) Older fledglings and adult vampires need to drink small quantities of human blood, but House of Night vampires do not attack humans to get it, instead of getting it from blood banks.

In vampire history, Nyx has been worshipped by all Vampyres as the Goddess of Night since ancient times by means of rituals such as the Full Moon Ritual, held in her honour each full moon. There are temples dedicated to her in every House of Night. Vampyres also honour her by living in a matriarchal society, where women have the rule, however, men are honoured and respected as guardians and companions and consorts.