I know its Witches week but I thought I would do a little history post on pumpkin carving. The tradition of carving faces into vegetables dates back to the Celts as part of their autumnal celebrations. They wanted to light the way to their homes for the good spirits like marigolds for Dia De Los Muertos, so they carved faces into vegetables such as turnips and squash. A light was placed within the hollowed-out vegetable. 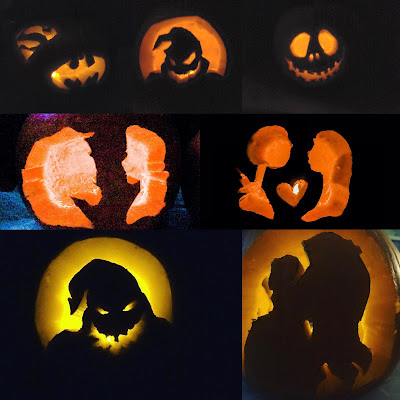 These carved vegetables were eventually called Jack O’Lanterns by the Irish who told a legend about a farmer nicknamed Stingy Jack., who tricked the Devil for his own monetary gain and according to the legend, Jack was a devious fellow who outsmarted the devil time and time again
Jack was the town drunk with a clever side, met the devil one fateful night. The duo shared a drink and, too cheap to pay for his booze, Jack convinced Satan to morph into a coin that he could use to pay for their beverages. Jack put the coin in his pocket next to a silver cross obviously The Devil was unable to change back into his original form, and Jack held him hostage until The Devil agreed not to take his soul. Under the agreement, The Devil would not bother Jack for one year and that, should Jack die, he would not claim his soul.

The next year, Jack again tricked the Devil into climbing into a tree to pick a piece of fruit. While he was up in the tree, Jack carved a sign of the cross into the tree’s bark so that the Devil could not come down until the Devil promised Jack not to bother him for ten more years.

As the legend goes shortly after his third meeting with the devil, Jack died. To Jack dismay that the arrangement had also barred him from heaven God would not accept Jack into heaven, so he went down below, banged on the gates of hell, and demanded his due from the Devil. But the devil kept his promise he wouldn’t let Jack into hell, either, and imprisoned him to an even darker fate.  The devil sent Jack into the dark night to roam the world for eternity, with only a coal to light his way. Jack lit the coal, put it in a hollowed-out turnip and has been drifting through the world, scaring children ever since.

Townsfolk began to refer to this figure as “Jack of the lantern,” and shortly thereafter “Jack o’ lantern.” People began to carve their own lanterns out of turnips, beets, potatoes and eventually pumpkins in hopes frighten away Jack’s wandering soul. When Irish immigrants moved to the U.S., they began carving jack-o’-lanterns from pumpkins, as these were native to the region.