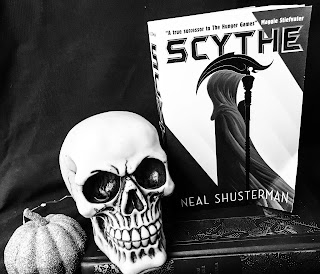 This is the first instalment in a trilogy with an amazing premise. The way Neal has envisioned how the world would work if we no longer had death was thoroughly developed. Imagine a world with no hunger, no disease, no war, no misery, humanity has conquered all those things and the age of mortality is over. All inhabitants of the earth are now immune from disease, old age and even suicide, an AI-governed utopia which ensures that famine and war will never occur again.

In order to combat the ever-growing population within this utopia, Scythes were appointed to carry out random ‘gleanings’, Scythes are the only ones who can end life—and they are commanded to do so. Everyone else can live infinitely and reset their physical ages whenever they feel like it. Scythes are skilful at 'killing' or 'gleaning' as it is referred to in this world, the Scythedom do not believe in killing, but ending your life when it is 'supposed' to end according to their order. Despite being about professional killers there’s a lot of talk about ethics and the state of the world. While gleaning might sound awful, it’s an interesting thing to think about and it’s made very clear the mortality rate is still hugely reduced from the “Age of Mortality”. Ultimately a utopia that is trying to address a problem with a morally grey solution.

The novel follows Rowan Damisch and Citra Terranova, two normal 16-year-olds who by chance witnessed a gleaning performed by the Honourable Scythe Faraday.  Impressed by both Rowan and Citra’s compassion and strength during their chance encounter with Honourable Scythe Faraday, Citra and Rowan are then chosen to by Honourable Scythe Faraday to become his apprentice to a role that neither of them wants. These teens must master the “art” of taking life.  After they both begrudgingly accept the offer, Both Citra and Rowan are thrown into the mysterious world of Scythedom where they must learn the deadly art of Killcraft and witness numerous gleanings. Over the course of their apprenticeship, both Rowan and Citra begin to learn that not all Scythes are alike and that Scythedom may not be as noble as they have been lead to believe. some scythes have differing opinions on what their duties are towards the main population and that leads to political friction and find that the Scythedom itself is at odds with itself. Citra is super strong and intelligent, while Rowan goes through some serious development in a morally-grey way.

As the plot began to build and twists and turn, it didn’t take long before I was flying through pages and rooting for characters. Scythe is different from most dystopian book it honestly made me question what it means to be alive and what it means to be human and question the meaning of life and death. In a world where you’re forced to kill people as your job or learning to kill people, humanity becomes questionable. The worldbuilding was spot on, just the right level of detail that you didn’t get bored and any question you might have had about this society would be answered at some point. The book is mainly told through two points of view through these two characters you experience different aspects of the world before they are brought together and the plot means that you get a pretty good sense of how society works. I love that there was an AI running everything (The Thunderhead) but it wasn’t the AI that was the villain, which was I unexpected given that typically the AI is almost always made out to be evil looking at you Hal.