The concept of living forever has an eerie significance in our modern world of biotechnology and cryogenics. Although the cryogenics labs have admitted that defrosting a body 100 years from now may pose some problems, it hasn’t stopped people around the world from signing up. 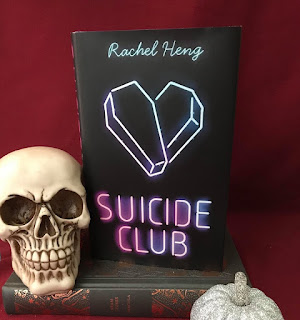 This book has a brilliant premise: in this future, immortality is within grasp, but only for those who are classed as 'deserving' and suicide is illegal, anything that might be construed as bad for your health is illegal in fact. "Suicide Club" is a science fiction novel that is set in near-future New York in which healthcare is the preserve only of people whose genes tested at birth convince a shadowy ‘Ministry’ that they’re worth spending money on. The population is in decline so to combat this, people are strongly encouraged to live a super-healthy lifestyle and to get various different body enhancements and replacements. Medical innovation has led to a world where organs are augmented, skin can be built to be near indestructible, and science has found out the best ways to live long and healthy lives.

America is divided into two classes of people: By an unnatural selection, certain individuals become 'Lifers'. Those lucky enough to become are 'Lifers' are often able to live for over one-hundred years while undergoing receive state-funded treatments to keep them alive for centuries with the goal of attaining immortality as long as their behaviour conforms to the standard imposed by agents. Then we have the ‘Non-lifers’ who don’t make the grade are stigmatised as ‘sub-100s’, who live normal human lifespans and they are classed and treated as second-class citizens and live and die just like us mortals do. Surgically enhanced residents partake in a compulsory, never-ending competition to see who stays alive the longest.

The city’s inhabitants are reminded daily by adverts warning them of the dangers of reckless activity for example “A fat-encrusted artery stretched out ‘Meat kills’ or the ubiquitous glowing red eyeball ‘Fruit -#1 cause of diabetes blindness’. This enforces that the joy has been stripped from life living in Rachels world, A famous opera singer no longer sings because it supposedly weakens her heart.

As the novel opens, lifer Lea and her partner, Todd, are hoping to be among those chosen for “the Third Wave”, a programme with such amazing benefits that it paves the way for immortality. Lea suddenly becomes derailed by the reappearance of her father, whom she hasn’t seen in over 80 years. She becomes mixed up with a woman named Anja, a fellow Lifer who helps lead an underground movement called the Suicide Club that rejects society’s sterile pursuit of immortality.

The contrast between the two main characters is great and Heng is skilful at developing her characters distinctive personalities. Lea spots her estranged, fugitive father for the first time in 88 years, and she comes in contact with a group called the Suicide Club, which advocates quality over quantity when it comes to measuring a life and finds herself caught between two worlds. While Anja’s mother was one of the people whose bodies were used to test new procedures and now her heart keeps going even though she is brain-dead but isn't allowed to die because life is precious. As the book progresses you get to know them both well and we learn about Lea and Anja's past experiences as they are relevant to the story that is being told here.

The world Rachel has created here is interesting and developed in such a way that it never felt info-dumpy. There are connotations of The Handmaid’s Tale when two agents who show up at Lea’s door to monitor her increasingly erratic activity, but it seems fitting that Heng keeps them on the compassionate side of dictatorial. Rachel has fun with the corporate jargon in which the Ministry masks its genetic segregation as Lea is forced to attend ‘WeCovery’ re-education sessions. But a little spoofish and brilliant someone gets cross in a diner because their ‘cabbage patties’ come with ‘regular gluten-free’ buns instead of ‘carb-free’ ones.