The Bellum sisters series by T A Grey

October 05, 2018
Happy Halloween Readers,
Before we get too deep into this review I will mention this is a succubus series and we all know how succubus feed. Get lost in a world of succubus, spell casting, and sassy jokes.
I haven’t read the fourth book yet so it will be a three book round up not a four sorry. I loved how different the paranormal individuals were interacting with each other. It was remarkable how T.A got the different groups to mix and work so well together. Overall there was drama, angst, and a story line that made it all flow. As this is three books I will do a sum up of the start of the story and for a synopsis of each book here's a link to  T A Greys website or checkout the bottom of my post. 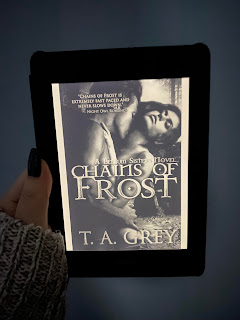 Let’s have a quick chat about succubus before we delve into the books. By definition, a succubus is a demon in female form, or supernatural entity, that appears in dreams and takes the form of a woman in order to seduce men, usually through sexual activity. The male counterpart is the incubus. That doesn't sound pretty but T A Grey makes the Bellum sisters more human but gifted with magical and seductive qualities (succubus) and on a succubus' 29th year they no longer needs food to sustain themselves, but sex.

When the will from their dead father bequeaths the Bellum sisters (Chloe, Willow and Lilly) into the ownership of new Protectors. The sisters do what any strong woman would with access to magic would so they cast a spell. Things get worse for when the spell the sisters perform summons an ancient demon from deep within the earth and just so happen to be the size of mountains.

The books
Chains of frost (Chole)
When a will from her dead father decrees Chloe into the protection of the renowned vampire commander, Tyrian en Kulev, she does what any woman would do—casts a spell. Things get worse for Chloe when the spell she and her sisters perform summons an ancient demon from deep within the earth. Now she's being hunted by a demon set on killing her and must live at the aptly named Castle Death with the king of cold, Tyrian. Surprisingly, Chloe finds that she doesn’t mind her new Protector so much. His cold, impassionate nature needs a firm push to show his true colours, and Chloe thinks she’s just the one to do it.
Tyrian en Kulev always pays his debts. When Francis Bellum dies and orders Tyrian to act as his eldest daughter’s Protector, Tyrian resigns himself to the position. What should have been a simple deal--keep her in the castle, protect her--has turned difficult. Chloe comes to him with a demon trying to kill her and a sexy attitude that keeps invading his thoughts everywhere he goes. The little succubus easily grabs hold of the heart he’d kept locked away for so long and makes him feel once again. But can they defeat the demon that haunts her and can Tyrian overcome his past and move on to a new future with Chloe?

Bonds of fire (Willow)
Hotheaded succubus Willow Bellum doesn’t take kindly to being given to the Alpha of the shapeshifters. When the will from her dead father puts Willow under the Alpha’s protection, she runs. Yet no matter how hard or fast she runs, he always seems to catch her. And with each stolen moment together, Willow finds herself relenting to his quick smile and passionate kisses more and more.
When the Alpha finally captures his feisty succubus, he proceeds with a full-on seduction meant to weaken her defences. Alpha Lyonis Keelan hasn’t made his way to the position of Alpha lightly and Willow’s defiance to his touch only makes him more determined to win her. Because whether she wants it or not, Willow is his mate and he plans to keep her no matter what.
As their love struggles to take hold, an ancient demon stalks Willow. Unable to rest until it sees her dead, Willow and Lyonis must stand together or risk losing everything.

Ties that Bind (Lilly)
Lily Bellum keeps many secrets, even from those she loves the most. With a determination and mindset that only she can help the demon Telal Demuzi—she sets off to join him in his cause for demon's rights, whether he wants it or not. But things don’t seem to go right from the beginning. To say he’s resistant to her charms is putting it lightly, but Lily is not one to back down or give in easily. She pursues Telal, slowly breaking down his incredible defences one smile, kiss, and touch at a time.
Telal’s years of planning are finally coming to fruition—to open the rift. Once a betrayer of his people, now he’s determined to fix the past. But one man stands in his way; one man who’s turned out to be a dark and sinister version of the boy he once knew. His plan to open the rift is met with hostility, resistance, and bloodshed unlike he’d ever thought possible. Telal finds that losing himself in the sweet body of Lily Bellum proves an excellent treatment to the chaos around him. Together, Telal and Lily get wrapped up in a world of dark magic, love, betrayal, and murder in the greatest journey of their lives