So, I read the Wicked years series books after seeing the musical and becoming slightly obsessed I honestly lost my mind when I discovered the musical was based on a book (well two books). I have also misplaced them when I moved so I’m sorry it’s a picture of the theatre program. 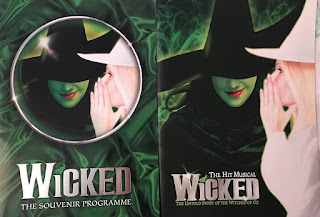 Wicked: The Life and Times of the Wicked Witch of the West is a novel published in 1995 written by Gregory Maguire and illustrated by Douglas Smith. It is a modernist exploration of the characters and land of Oz from L. Frank Baum's novel The Wonderful Wizard of Oz, its sequels, and the film adaptions. The book is a political, social, and ethical commentary on the nature of good and evil and takes place in the Land of Oz, in the years leading to Dorothy's arrival.

Unlike the popular movie and Baum's writings, the novel presents events, characters and situations from Baum's books in new ways, making a number of alterations, for example, this novel is not really child-friendly; it contains adult language and content, including violent imagery and sexual situations. Many people might believe this book series fails to meet the standards of The Wizard of Oz. I'm not afraid to say... but we're not in Hollywood's Oz anymore. Also, if you think Hollywood's Oz is an actual thing look into the stories of what the poor Judy Garland had to go through.

The Wicked Witch of the West is a pretty clear-cut character.  She is evil. She is green. She is scary.

Wicked takes this evil, green and scary witch and turn her into a person we can love and it doesn't do it in a cutesy way. Elphaba is born a freak in the eyes of the people around her she is not only green, but she had teeth like a shark and has a severe allergy to water. Her upbringing wasn't too much better She had to help raise and take care of her beautiful and crazily armless sister who eventually become the Wicked Witch of the East. She was ostracized in school. Her roommate Galinda, who would eventually become Glinda, the good witch, could barely stand her and despite all of this, we grow to like her. She's smart as a whip, sarcastic and actually quite fun.

Elphaba cares for all living creatures she gets involved in a cause to help protect the capital A Animals (those that can talk), who are being rounded up, by the real bad guy of the story: The Wizard. We even see her take a lover and fall in love and then we see her lose her lover. The evolution of her becoming the Wicked Witch of the West is a natural and logical path and even at the end, crazy as she became, we understand her and pity her, making her that much tragic.

Maguire gives a theory to why Elphaba is Green the Miracle Elixir It was given to Elphaba's mother who took it and had bizarre dreams. is suggested that Melena taking the potion when Elphaba was conceived may be why her skin is green. Elphaba keeps the bottle of elixir with her throughout her life and takes some late in life and has prophetic dreams. Some are so disturbing to her that she rarely sleeps for the rest of her life this could possibly be part of the cause of her loss of wits near the end of her life. Dorothy takes this object to the Wizard as proof of Elphaba's death.

The brilliance behind Maguire's books is his understanding that both the fantasy world and the real world can be united by mystical situations, realistic emotions, and simple human spirit. It seems rather, that he intends to take the perfect pretty worlds we are used to, and turns them into something we hate recognizing about ourselves. Maguire demonstrates that no matter what… life happens. People get jealous, people feel resentments and hurt. There isn't always a simple solution to everything.

In 2003, the novel was adapted as the Broadway musical Wicked.

Books in the series