Empress of all seasons by Emiko Jean

Thank you, NetGalley for the chance to read this ebook for free in exchange for an honest review
Spoilers
Due to be released: 6th November 2018 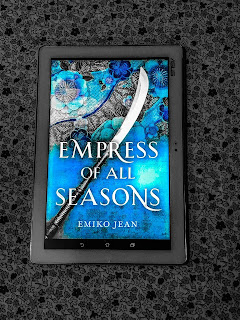 The concept of this book drew me to it right away. I mean who doesn’t love a fantasy novel inspired by Japanese culture where the human Emperor is determined to enslave and destroy magical creatures, supernatural monsters and spirits. also the fact that Empress of All Seasons is inspired by the Emiko’s own Japanese heritage adds to the beauty of this book. Each generation, a competition is held to find the next Empress of Honoku. The rules are simple. Survive the Imperial Palace’s enchanted seasonal rooms. Conquer Winter, Spring, Summer, and Fall. Marry the prince. Even though everyone is eligible to compete to marry the price Yokai are an exception, Yokai, look human but they have the ability to transform into a monster because of this the Yokai are feared. It just so happens the main character, Mari is Yokai which means she is able to partially shapeshift.

Mari comes from an all-woman clan where they trick human men into marrying them and make off with their treasure. Mari has spent her whole life training to enter the competition to win the honour of marrying the prince of Honoku. Mari has been tasked by her mother to win the highest prize of all, become the prince's wife by defeating the four seasonal rooms to become the Empress of All Seasons. If Mari is discovered as being Yokai, her life will be forfeit. As she struggles to keep her true identity hidden, Mari’s fate collides with that of Taro, the prince and Akira, a half-human and half-Yokai outcast.  Taro, the prince, however, doesn’t like being a prize to be won and doesn’t agree with his father on how Honoku should be run.

The story is told from changing the point of view between three characters: first, we have Mari who is a brilliantly snarky female lead that pushes back when she needs to. Then we have Akira who is part human and part Yokai and is Mari best friend. Finally, we have Taro the Prince who also goes against what is expected of him but he’s a bit presumptuous about it.

This bit might be a little wordy but I loved the world building by Emiko It's vivid and gorgeous. I will be honest I did give me slight Hunger Games vibes with the different rooms being treacherous seasons that the contestants have to fight through.

I knew relatively quickly Emiko’s vibrantly expressive writing style would completely suck me into the world of Honoku. Emiko doesn't shove the scenery in your face, but rather it's a good accompaniment to the story there were intermissions about the gods' lives, and those were fascinating. The setting and descriptions are so well written that I felt like I was actually there first hand, especially when it came to the season rooms. The writing style gives you that feeling when somebody is telling a story and you're lulled by the sound of it. The idea of the competition in which girls have to survive deadly magical rooms, one for each season, to marry the prince didn't feel like a stereotypical YA dystopian.

If you're interested in Japanese culture, folklore, and mythology I would recommend giving Emiko Jean's newest richly atmospheric release a try.