This is the third or fourth time I’ve listened to Red Dwarf: Infinity Welcomes Careful Drivers and I’m finally going to review it as it still makes me laugh. I loved the series, I can’t recall when I started watching it but I remember having a reading week at university and I watched it all from the beginning. 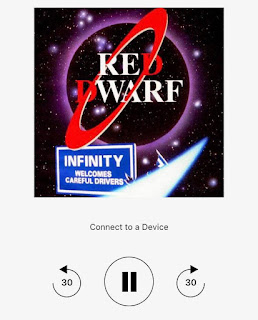 For me Red Dwarf never really went for the cheap gag the effects may be a little off but the humour was there. Even now I will re-watch episodes as it the right mix of humour and science fiction for me. Grant Naylor has used the novel format to explore the characters' backstory more than possible in the half-hour. In fact, I think it adds to it and delivers a more in-depth exploration of the characters.

Chris Barrie makes this book his own. Chris Barrie narrates this novel with skill and vocal dexterity and has an amazing knack of impersonating the whole team. His character voices are spot on faithful to the TV series. Obviously, his Rimmer is first class but his depictions of Lister, Holly, Cat and Kryten are all spot on.

Infinity Welcomes Careful Drivers is basically the novelisation of the first two seasons of Red Dwarf, though it is drafted in a way that creates a much more seamless story. Whilst this might distort the listener's expectations slightly it in no way lessens the quality of the story. The book might be a condensed version of stories from the first and second series but there is so much detail and backstory added.

Here is a quick roundup for anyone who hasn’t heard or seen any of the series. The main setting is the mining spaceship Red Dwarf. An onboard radiation leak kills everyone except lowest-ranking technician Dave Lister, who is in suspended animation at the time, and his pregnant cat, Frankenstein, who is safe in the cargo hold.

Following the accident, the ship's computer Holly keeps Lister in stasis until the radiation levels return to normal – a process that takes three million years. Lister emerges as the last human being in the universe. His former bunkmate and immediate superior Arnold Rimmer is resurrected by Holly as a hologram to keep Lister sane. They are joined by a creature known only as Cat, the last member of a race of humanoid felines that evolved in the ship's hold from Lister's pregnant cat during the 3 million years that Lister was in stasis. In Series III, the computer Holly changes from male to female and the mechanoid Kryten the crew and becomes a regular character.

The crew encounters phenomena such as time distortions, faster-than-light travel, mutant diseases and strange lifeforms had developed in the intervening millions of years.

I believe fans of the show will enjoy this and I think it will appeal to those who enjoy similar works like "The Hitchhiker's Guide to the Galaxy". I would recommend to any SMEG head!!