Hello Readers,
Thank you, Oftomes Publishing for the chance to read this ebook for free in exchange for an honest review
Spoilers
Due to be released: 5th November

I originally saw this book teased and cover reveal at YALC. Saving Death is R L Endean’s debut novel, a beautiful gothic romance dealing with loss, love and death. This will be more of a spotlight with a little review and synopsis to be updated after the release date, saying that there is one rather big spoiler in the review. 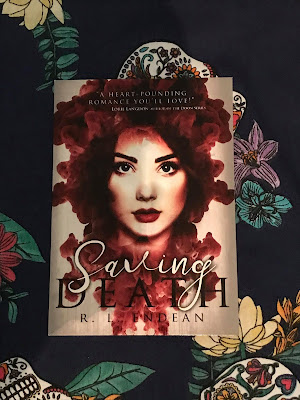 Synopsis
Two tortured souls. One unthinkable love.
Ava is already trying to navigate the dark depths of grief when she meets a curious stranger who knows too much. In a desperate need to feel anything other than pain, she is drawn to him, intrigued by the rush he invokes in her. Soon, she finds herself hurled into a shattered world of dangerous emotions, black magic and primal loyalties; and it is here that she begins to unlock truths that might have been better left alone.

Review
Ava is not in a good place at the start of her story, having survived something she can't remember that left her mother dead but, the strange part is the dreams she keeps having. To make things worse Ava is sent to live with her father on his farm, away from old friends and the home she knew, she must try to start over. When she goes to live with her dad, she meets Sam a young man hired by her father to work on his farm.

Sam is the mysterious and handsome guy that somehow is present in her life and keeps saying secretive things to her which spikes her interest in him. Sam is and seemingly close in age, so it seems only natural that Ava is attracted to him. But in the midst of all of that she fears life, she fears this feeling and most of all, she is afraid of trusting Sam because she doesn’t know him that well. Getting closer to Sam not only brings a rush of emotions to young Ava's heart but also plunges her into a strange world lurking just beneath the surface. Ava soon discovers that she might not know him that well but maybe she can trust him. But Sam seems to have his own secrets and there is more to him than meets the eye.  I loved the dynamic they have throughout the story and development as the story processes and I thought I was believable.  SPOILERS - Sam is not completely human, and the take on what he is very interesting. I loved the reveal, and the mythology and politics around him and his kind.

Ava is a young woman dealing with serious depression while this is not stated outright, it is obvious when you realise why she has gone to live with her father at his farm and her subsequent actions. Ava is grieving and the Endean does a very job of showing that, wanting to just move on, fit in with her new situation, and sleep a night without nightmares. Endean does not gloss over feelings of grief Ava’s grief plays a very prominent role in this story and I think the way it was handled was accurate and real. The opening is particularly good at revealing that sense of unease of everyone tiptoeing around Ava.

I will be looking forward to more of Endean’s works in the future, and I hope there’s more of Sam and Ava.