Things a Bright Girl Can Do by Sally Nicholls

I picked up this book after seeing it being promoted at YALC two years ago. 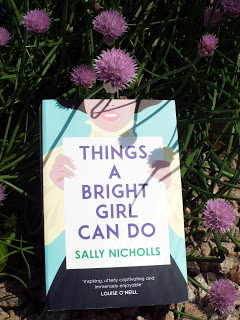 Things A Bright Girl Can Do takes us back to the 1910s and is an account of the Suffragette movement, the build-up to WW1 and its consequences on ordinary people. I honestly love how the book doesn’t evade the tough subjects like socialism, suffrage and internationalism vs the war effort.

The book is divided into seven parts the first part is set in February 1914 and the last part is February 1918 and is told from the perspectives of three teenage girls.

The three protagonists Evelyn, May and Nell and they all represent the different sides of British society at the time and are united by the cause of gaining votes for women. Moving away from the main characters for a second the book made me think about what life must have been like for people during the war and while the woman was trying to get the vote something, something I now think we kind of take for granted. You get the sense of belonging and how they all would unite together and it honestly makes me so proud to be a woman, I would like to believe that I would have done something to help.

Back to our three protagonists
Evelyn
Evelyn is the first character that we are introduced to. she is seventeen, and despite being from a privileged background, she may never be allowed to go to a university. She is ambitious and unquestionably angered by the fact that, as a woman, she is not expected to go onto University or better her education. sadly, this would have been a situation that many girls from a similar background would be in. There were certainly parts of Evelyn’s journey that made me feel quite emotional and she certainly sacrificed a lot at a young age.

May
May is fifteen and already sworn to the cause, though she and her fellow Suffragists refuse violence. May lives in one of the most respectable streets in the East End of London with her mother and they are pretty well off. May happened to be a Quaker, and doesn’t believe in violence or killing even when Britain is at war.  I absolutely loved the conflict between how passionate May was about the right to vote but that she called into question some of the more violent actions of the Suffragettes.

Nell
Nell, a girl who's grown up in hardship and lives in just two rooms with her whole family. Nell is incredibly fiery, passionate, protective and driven. I couldn’t believe how far she would go to help support her family, no matter the cost. I liked how different she was from the other two girls and as a reader I feel we gained a completely different insight into what life was like as she is from a much lower social class. How Nell and her family struggled when the war was declared was just heart-breaking it made me get a lump in my throat knowing that this happened to so, so many families. At the time transgender wasn't a known thing and there are some clear signs that Nell is coming to terms with not fitting into her "gender roles" with how she is supposed to act and dress and as a result, has been made an outcast from her part of society.

Aside from suffrage, this book had great diversity threaded through it and its many themes. There’s a sweetly written romance between May and Nell which is particularly endearing because Nell always thought she was alone in the way she felt.  The description of the marches, the excitement, the feeling of being part of something big and beautiful conveyed well. The romance and friendships are the only light in a book filled with injustices, violence, a hunger strike and illness. But all three characters grow and mature and learn from the hardships they experience through an incredible journey

I honestly cannot recommend this book enough! I really did enjoy this book, it brings light to what happened all those years ago and will hopefully introduce a whole new generation to the women’s suffrage movement. The book made me feel proud and empowered to be a woman and will hopefully see a new generation continuing to honour the women who sacrificed so much. The book also works as a reminder to be grateful to all those women who fought for suffrage in such times.