How the Grinch Stole Christmas! by Dr. Seuss

I am a huge Dr, Seuss fan thanks to Mother Goose and I’m pretty sure I still have the books somewhere. 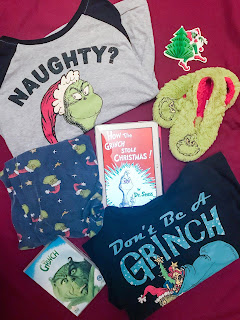 I love The Grinch I have a collection of merchandise nowhere near as much as The Nightmare Before Christmas but you get the picture. The Grinch, it has always been part of my Christmas tradition to the extent that Mother Goose and I still argue what can be played first The Grinch or Home Alone.

I loved seeing Dr Seuss’s artwork again, his unique and imaginative style still makes me feel warm and fuzzy.  I love The Grinch as a character from the book, to the 1966 animated television special to the live action film with Jim Carrey. I haven’t seen the new one yet.

But this book doesn’t have Dr Seuss’s best rhymes, unlike his other books the couplets aren’t very clever or imaginative. The ending is very abrupt too it suddenly it wraps things up but that might just be me being nitpicky and wanting a little more.

I am going to be a little hypocritical for a minute but bear with me. I love how this book tells kids that Christmas isn’t about material presents but about something more substantial, meaningful and profound like community, friends and family. But at the same time for kids, Christmas IS about material things and that goes away when they grow up let so let kids have the magic and enjoyment now.

I remember how excited I got about opening the presents on Christmas Day and playing in the snow when it would eventually come. I still remember when I was around six, we were spending Christmas at my Aunts and we actually had a white Christmas at this time my aunt was in a flat well my dad and uncle were jolly and decided to throw snowballs at the window causing my mum to throw her coffee everywhere all over my aunt’s new sofa. Such a random snow memory but it’s actually one of my favourites.

It might just be a guilty pleasure of mine, or that I'm overly nostalgic, but "How the Grinch Stole Christmas" is still entertaining and still makes me laugh.

But the general outlines of the story are expanded in the Jim Carrey film so it had to be pumped up with a background story. As a result, we see the Grinch as an infant and then a rebellious child, bullied for looking different, he is mercilessly taunted by his peers and eventually flees Whoville to settle in a cave atop Mount Crumpit. Even as an adult the Grinch hates Christmas he goes as far as putting puts nails in the blender and flattens his head with cymbals so as to avoid the sickly sound of Christmas music. The TV cartoon is better, but this live-action film is worth a watch.