The Mortal Word (The Invisible Library series) by Genevieve Cogman

Thank you, Jamie and Pan MacMillan for sending me a copy of The Mortal Word by Genevieve Cogman for free in exchange for an honest review.
Spoilers 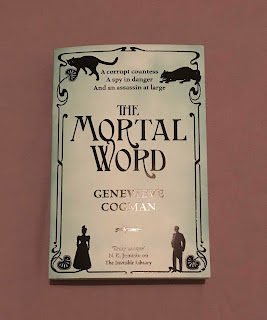 A quick round-up on The Invisible Library series is a multiple-parallel-world fantasy in which our universe contains untold a wide range worlds, many of them inhabited with humans in some alternate version of history, with only a few beings aware of the multiplicity or able to travel between worlds.

The balance between worlds is maintained by the Library and its Librarians. Librarians have unique technology, their own form of magic and the ability to traverse worlds using gateways from their huge and timeless Library into local libraries on the individual worlds.

Our protagonist, the time-travelling, parallel-worlds jumping, Librarian agent Irene Winters finds herself in complex and treacherous circumstances. She is plunged into the middle of the peace negotiations between the high Order Dragons and the high Chaos Fae, with the Librarians acting as peacekeepers. If the talks go wrong, the outcome could be the war that destroys worlds. Attempts to broker a peace treaty are jeopardized when a high-level dragon is found murdered, and unsurprisingly the dragons are quick to point the finger at their sworn enemies, the Fae and even the impartial Librarians.

Joining Irene on the investigation is her talented detective friend the Victorian Great Detective Peregrine Vale, with Irene being placed in charge, along with some backup from former Library apprentice Kai. It appears that the evidence is pointing towards a dangerous fae known as the "Bloody Countess". But is she really to blame or is it someone else trying to stop the peace process? what Irene and her group discover threatens the lives of all involved in the conference, including the Librarians being kept as hostages and threatens the future of the Invisible Library itself.

Despite the murder, the peace talks must go on. As a representative of the Library, Irene must oversee the meeting to ensure that the process goes smoothly but someone is determined on disrupting the talks with poisoning and sabotage attempts, causing even more trouble for Irene and her team.

The novel is full of the usual thrills and spills, wry humour, and genuine emotional pathos and a page-turner. You just never know what’s coming next, from possessed felines to poisonous apples – it is wonderfully unpredictable and at the end of each chapter, you are left wondering what everyone’s motivation is.