The Orphanage of Gods by Helena Coggan


Hello Readers,
Thank you, NetGalley and Hodder & Stoughton for the Ebook of The Orphanage of Gods by Helena Coggan for free in exchange for an honest review.
Spoilers
Publication Date: 21 February 2019

This is the first book I have read by Helena Coggan and I dont think it will be the last. Sorry its possibly a little early for a review but the release date is near my birthday and I want to give this book its own spotlight.  This review contains spoilers 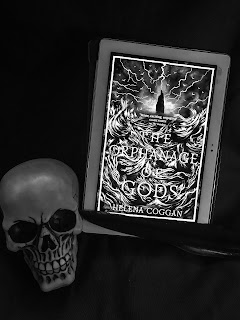 As soon as I saw that this was about Gods, I immediately wanted to get my hands on it and this feeling was only compelled further from reading the blurb…  The gods were all but wiped out, the children they left behind have been imprisoned in an orphanage and any who show signs of divine power vanish from their beds in the night, all knowledge of their existence denied. Who doesn’t want to dive in head first?

The book is set in a world where there are humans, and gods (people with silver blood and magical powers). We also have half god, meaning that the person only has some of the attributes of a god. All of the Gods have varying powers it is very rare to find more than one person with the same power.  The gifts the Gods have are called demesne.

The book starts in the middle of the action. Hero and her self-adopted brother are on the run and are racing to find their friend/sister Kestrel and the fearful Guardsmen on their trail. This scene had me on the edge of my seat, and kept me there. It was brilliant and this pace was kept up throughout the book. Two generations ago, Gods started to be born from mortal women and soon became so violent and unpredictable that the humans turned against them and started using the guardsmen to defeat the gods. As readers we are quickly introduced to Josh’s power, which is the ability to manipulate light.  We’re not immediately told what Hero’s power is, but it is clear that Josh is much more powerful than she is although she has the ability to heal others. Hero and Josh’s relationship is strained and is getting worse the more time that passes without Kestrel, Hero’s sister (not by blood). The three of them have stuck together since they met at the Orphanage  (where children are kept, in case they are gods) - it’s been them against the world for as long as they can remember.

The world the book is set in is more modern than I thought it would be and I thought the world-building was done well. Although it would maybe nice to learn a little more about why people hate the gods. But aside from that, I thought this was a really strong element of the book. The book is written in three parts, each narrated in first person. Part one is told by Hero, a seventeen-year-old girl who has escaped from an orphanage with her brother Joshua. Part two is told by Raven a ten-year-old girl. Finally, part three is told from Kestrel's perspective.

Everything we learn about the Orphanage is told through memories and sounds like a regular Orphanage. Then the realisation hits that that all the kids are there, because of two reasons either their parents were Gods and consequently killed, or are human and their parents were killed by the cross fire. Whilst in the Orphanage the kids hear of ‘The Resistance’, a group of surviving Gods that supposedly live in the North, who are trying to fight back against the Guardsmen.  They are told monstrous things about these Gods, but Hero is clever enough to realise that the Guard are probably lying

Overall, I really enjoyed this book. I thought all the characters were very well built. There's a theme of power corrupting, for gods and humans alike ran throughout and kept my interest. I think it was entertaining while still having a lot of depth, and I would definitely recommend it to others.