The Tattooist of Auschwitz by Heather Morris


This book is based on interviews that were conducted with Holocaust survivor and Auschwitz-Birkenau tattooist Ludwig (Lale) Sokolov told to Heather Morris before his death in 2006. There are Spoilers in this review and I talk about the concentration camps. 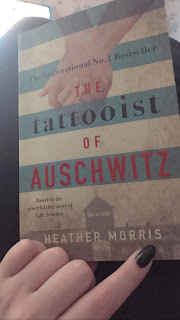 In April 1942, Lale, a Slovakian Jew, was transported to the concentration camps at Auschwitz-Birkenau after Lale had offered himself as a strong, able-bodied young man in the hope that it would save the rest of his family from being split up. On arrival, the Nazis changed his name to 32407.

Not long after he arrived at the camp, Lale contracted typhoid. He was cared for by Pepan the man who had given him his identification tattoo and French academic. Pepan took Lale under his wing and set him to work as his assistant. He taught him how to keep his head down and mouth shut.

Then one-day Pepan disappears and Lale was made the Tätowierer (German for tattooist). Partly due to his captors discovering that he spoke several languages - Slovakian, German, Russian, French, Hungarian and a bit of Polish. Lale was then tasked with permanently marking his fellow prisoners, given an assistant and had an officer assigned to monitor him, which gave him an appearance of protection.

Being the Tätowierer gave Lale special perks such as more rations, better sleeping conditions and the ability to move around the camp more freely. He was able to exchange the money and prized possessions of those who died in the gas chambers for food and medicine. Lale was generous and provided for so many and saved lives. While giving a tattoo, he meets Gita and feels an instant attraction to her. Meeting her gives Lale a reason to survive. He uses his position for the greater good even through struggles and extreme suffering, with the hope of one day being with Gita forever, outside of the camp (I'm not crying! I have dust allergies).

Imprisoned for over two and a half years, Lale witnessed horrific atrocities and barbarism but also incredible acts of bravery and compassion.

First off, I loved this book I read it in one sitting (two hours) and it honestly took me a couple of days to get over the emotional roller coaster that is this book. As soon as I finished it, I rang my cousin trying to work out how I felt and from all the jumbled mess that came out was I was crying happy-sad tears. I was so happy because of the love that Lale and Gita shared but the circumstances of how they met each other are beyond heart-breaking. Told through the point of view of both Lale and Gita, Heather Morris has a lot to say, and she certainly touches a nerve. That being said and I mean this with no disrespect but I personally felt at times with Heathers writing style you could easily forget that this isn’t entirely a love story. I found myself that engrossed in Gita and Lales story my subconscious blurred out the bad but that might be down to me as the reader.

I don’t think I mentally prepared myself to read this book I cried in the first five pages and that was before we got anywhere near the camps. Lale surrendered himself to save his family and is in the cattle wagons on his way to Auschwitz-Birkenau and he thinks to himself “with the money and clothes he has, he might be able to buy himself out of whatever they are heading for, or at the very least buy himself into a safe job”. Even with a basic understanding of what happened during the Holocaust, you know this isn’t going to happen and it broke my heart as a reader and as a person. Having said I didn’t mentally prepare myself there were only two other times the book made me cry I broke down with Lale at one point and the last when I had finished the book and excuse the term but a little shell shocked.

This book shows brutality, hatred, and evil but what I hope people take away is the compassion, strength, dignity and resilience that Lale and so many others named in this book showed.

This book is ultimately about courage in the face of the horrors of the camps and loss of family, courage sustained by the strength of the human spirit and it's a love story that I'll never forget. This book should be read at least once. There is not much more I can add other than what Lale himself tells Morris - that he wanted his story recorded so "It would never happen again."