Hello Readers,
There is a story behind me getting Geekerella after talking to Jamie at the Quirk stall my second year at YALC I picked up My Best Friends Exorcism by Grady Hendrix and my cousin picked up Geekerella. The original plan was to swap over well it turns out we turned into dragons guarding our treasure and couldn't share so we ended up getting our own copies.  Also, if you’ve followed my blog for a while you know I love a good retelling (I just checked I’ve reviewed 9) and this was no different there’s just something about them that makes me feel all warm and fuzzy. Book two The Princess and The Fangirl is out April 2nd. Also Spoilers 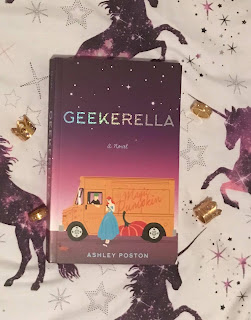 This book is a Cinderella retelling set in current day Charleston, South Carolina, where Danielle (Elle) Wittimer is part of the  “Starfield” fandom. A fandom that she shared with her late father. “Starfield” reminds me of Star Trek but not as serious and has been on re-runs for years. The plot follows the key aspects of the original Cinderella story Elle goes to the ball in a ‘coach’, there's a fairy godmother, she has to leave the ball before curfew and the slipper on the steps. Elle lives with her stepmother and her stepsisters who bully her daily. I loved the ways Ashley incorporated these details into her version of the tale.

Elle writes a blog about Starfield, and she is extremely critical when Darien Freeman, gets the movie role of Carmindor, the Federation Prince (and the stories Prince). To promote the movie of Starfield, Darien is signed up to appear at the annual convention for Starfield fans called ExcelsiCon. The con also hosts a cosplay competition and a masquerade ball with the first prize being two tickets to the premiere of the movie and a cash prixe. Elle assumes Darien is just a shallow, spoiled movie star, and therefore an insult to fans who love the stories She also feels like her fandom has been violated because Darien comes along with an entire fandom of teenage girls who are in love with him and his looks but not the Starfield fandom. Ashley perfectly depicts the anger and sadness hard-core fans experience when their beloved, quirky shows hit the mainstream in my opinion.

However, Darien, can’t seem to catch a break from the press. He also has a bit of a tragic backstory, his mother had no interest in him, and his father, Mark, seems to care for Darien only as a commodity. Darien watched the show religiously to help fill the gap in his life. Back to Elle, she is relatable, a complete nerd with a tragic backstory she charmed me and you can’t help but sympathise with her. When she’s not being tormented by her stepmother and her twin daughters, Chloe and Calliope, she has to do chores and cleaning. She also works on a food truck called The Magic Pumpkin (I LOVE IT!).

This book has all the feels this is a warning Elle's connection to her late father through the show Starfield is bittersweet, and Darien's desire to have his dad be a dad rather than a pushy manager is heart-breaking.

The chapters alternate narration between Elle and Darien and I love this approach and it works well because it gives the readers good insight into the lives of each character. I found Danielle and Darien’s relationship to be adorable. They’re both quite awkward in real life, but their true feelings are shared with one another through text messaging with complete honesty. Before the ball, Elle and Darien inadvertently “meet” through texts and fall for each other. But neither knows the identity of the other; they only refer to each other as Carmindor and Princess Amara.

Geekerella is wonderfully sweet and fluffy but I’m sorry I can’t say this is my favourite Cinderella retelling that title will always belong to the Everafter film but this is a close second.
Here's a link for book two Princess and The Fangirl
Lx