When I was growing up, I was huge Buffy fan but I did jump straight over to Angel (I know I’m a traitor but David Boreanaz sorry not sorry).  There are spoilers in this review. 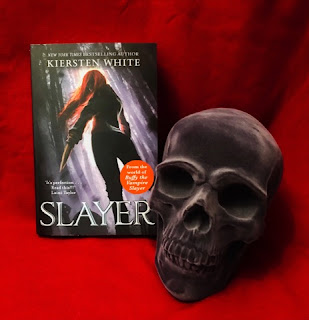 Despite being in set in the Buffy-verse Slayer doesn’t focus on Buffy but instead looks at the descendants of Merrick. Merrick was Buffy’s first watcher (before Giles) and how they are handling things after Buffy saves the world which caused all the magic in the world to disappear. Buffy’s actions also mean that no Slayers will rise again and the Watchers have frayed to breaking point This wonderful book is filled with some familiar faces and many new ones and I can't wait to see what comes next.

Nina and her twin sister, Artemis, are far from normal. They grew up at the Watcher’s Academy where teens are trained as guides for Slayers. Unlike her sister Nina has never embraced the violent Watcher lifestyle instead she follows her instincts to heal, carving out a place for herself as the school medic. Nina has always been considered the “less important” of the twins as Artemis has always been favoured. However, Artemis has always been there protecting her sister and the remaining Watchers. Spoilers are coming!

In the beginning, our main character Nina talks about her hate for Buffy but as the story progresses you understand why. Nina hates the Slayers and thinks all Slayers are violent, irresponsible, impulsive creatures. Well surprise sweet you are one!! I loved watching her journey as a Slayer after years of hating everything they are. Nina is a healer, not a fighter she doesn’t want to hurt people and doesn’t really want to hurt demons, she wants to help them.  This internal conflict is at the centre of Nina’s story, and it’s what makes her such a dynamic character. Nina is one of those characters that you immediately get attached to which makes her a brilliant main character and has a lot of believable development throughout the book, more than you would expect from a single novel.

As with Buffy the Vampire Slayer, the characters are fantastic and really rounded out this coming-of-age story.  Slayer like Buffy sets up numerous side characters who not only move Nina’s story forward but are independent well-developed characters. This book contains a lot of  family tensions  while emphasising the bond of sisterhood between Nina and Artemis.

Slayer was everything I hoped it would be, and so much more. Kiersten has done a wonderful job balancing this new series with the feel of the Buffy-verse while inserting new characters while continuing to develop and evolve the story. It honestly had that Buffy feel to it, including the humour we all love. The book had a little of everything I remember from the original series, and then took it to another level including vampires, demons, slayers, and Watchers. I loved that the story focused more on the characters than the big bad. (Shout out to my Boo Angel) Slayer like The Angel series identifies that not all demons are evil.

I loved that Kiersten made it easy to enjoy for those who have never been introduced to the world of slayers before. There was just enough explanation of the world to allow new readers to be comfortable with the new characters and their story. Kiersten hid some wonderful Easter eggs and references for those who fell in love with the world, and characters, years ago. I would recommend it to anyone who enjoyed Buffy or anyone who wants a kick ass female lead who starts of like most of us "normal" people.