Hello Readers,
I finally did it, I finally read American Gods after watching the first season on the TV series but hey we got there. The plot is complicated, yet crammed with marvels as the beginning promises pleasures and horrors, the middle disturbs the balance, and the ending surprises. 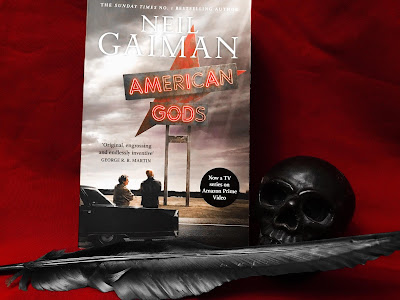 Shadow Moon is a big, soft-spoken, ex-con whose life is shattered by the tragic death of his wife (Laura) in a car accident. While reeling from the aftermath of his loss, Shadow is approached by smooth-talking and mysterious man named Mr. Wednesday. Shadow is paid by Wednesday to be an errand boy while he travels America trying to rally his troops in preparation for a war between The Old Gods, and The New Gods.

The Old Gods were brought over by immigrants. Wild, fantastical tales of elephant-headed men and trickster spiders with tales of power, lust, fear and worship. While The New Gods created by the immigrants' descendants. Have evolved into the Gods of money, media and might. Newly formed out of the hopes, dreams and desires of a people who've long since forgotten the Old Gods. I’m sorry but I have to say The Gods are the best part of this book degenerate and threadbare, yet still Gods, capable of inspiring both allegiance and terror.

The Gods are sustained in this world, by people’s worship and their belief in them. When the ancient Norsemen came to America, they brought belief in their Gods with them. When they made sacrifices to Norse Gods, it made them strong and powerful. Equally, as the people forgot about the Gods and stopped telling their tales and making offerings to them, their power waned.

These New Gods of Media, Technology, Internet, Electricity, Highways, Drugs, etc. are young, brash and full of strength due to the worship and adoration they receive. Now, these young Gods are looking to destroy The Old Gods and claim supremacy over all of Godliness.

Neil paints a portrait of America that resembles America as we know it, to me his America might be closer to the truth than some are comfortable with. To me, this story feels old and established almost legend, like in itself passed down from generation to generation. I think this was because I watched the first season of the TV series first. Neil celebrates the underground spiritual traditions, glory in the magnificence of its landmarks, landscapes, and bizarre tourist traps, and most important Gods in decline, battered and diminished as they may be by the shallowness and speed of our new technological world.  The creepiness factor is there, the writing is brilliant, Shadow is a big lug you can't help but love. I have always been fascinated by mythology, so that's an added bonus.

Gaiman loves not only fantasy, but also mystery and horror, and here he fulfils the genre requirements of all.  This story works on multiple levels on its surface its a fantasy, rich in detail and fun to read, but leaves the reader satisfied, with a lot to think about once the book is put down.

Just a little bit about the TV series I’ve just finished season two and I’m still loving it and I hated Laura most of season one and part of season two but she’s slowly melting my ice heart. Also, Ricky Whittle who plays Shadow plays Captain East in Austenland and I can’t move past it. Turns out I have an irrational fear of Crispin Glover. This goes for both the book and the TV series Bilquis ewwwww.