I am continuing Terry Pratchett week with The Hogfather. This year for my birthday I asked for Reaper Man, The Colour of Magic, The Hogfather, The Fifth Elephant and Going postal in the new covers by Gollancz and Doubleday they are stunning. This is also the first of the books I’ll mention that has been adapted for the TV. This is one of the Discworld books that I've reread the most, including print and audio, and I've seen the mini-series a couple of times. 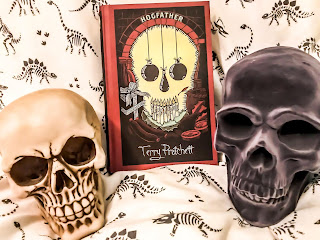 The Hogfather takes place in the Ankh-Morpork region of Discworld, on Hogswatchnight. If you’ve been good, and you hang up your stocking and the Hogfather will leave gifts. In the Discworld, The Auditors control the Universe. The Auditors invented dullness and they do not like Humans, because Humans are messy. The Auditors have decided that they need to "remove" the Hogfather so they contact the Assassin's guild and Mr Teatime is sent to "inhum" him. On Hogswatch how rude!

Teatime is in the realm of the tooth fairy trying to use what's there to assassinate the Hogfather and Susan trying to stop him (we’ll jump back to Susan) while Death finds himself in need to impersonate the legendary Hogfather to keep the belief in him alive and Death is taking children's Hogswatch wishes very literally. Also, Death is thrilled to finally have a job where people are happy to see him. Despite Death instructions to his granddaughter Susan not to get involved, so she leans on her family heritage and investigates the latest interference by the Auditors of Reality. Susan is the level-headed, self-sufficient duchess-turned-governess who firmly believes that "Real children do not go hoppity-skip unless they are on drugs." Susan tries to cling to normality but how normal is hitting bogeymen with a poker. While all this is going on the wizards...well they’re doing their thing. I love Death and there are so many funny moments with him during The Hogfather like when he tries on Hogfather's false beard for size. Despite all the fun Death learns the gift of life (Girl with Matches') and the unfairness of socio-economic status quo.

As you can imagine chaos ensues. Each and every group of characters was hilarious. From Hex only working when it's given its teddy bear and the ever-complaining raven, to The Death of Rats (since seeing the mini-series I have so much love for The Death of Rats). Then there are also the contemplative musings of Death with Albert and/or Susan.

This is a book about the nature of belief while being this story is hilariously entertaining. The reminder that things we think of as essential, eternal, unbreakable are here because we willed them to be. Such as the "Oh God" of Hangovers and the Verruca Gnome. For me, though, the real draw of the particular book is that it reminds me of things that I need to be reminded of. It reminds us that life is not fair but it bloody well should be, that fantasy is vital to humanity and it doesn’t hurt to try to be a decent human being, too.

There was fun, there was suspense, there was the signature humour as sharp as Death's scythe and this book unquestionably holds up to rereading.