Hello Readers,
Thank you, Jay, for sending me a ebook copy of Strungballs by Mike Russell for free in exchange for an honest review.

This is the fourth book I have been lucky enough to receive from Jay and Mike Russell and I honestly couldn’t wait to jump back down the rabbit hole that Mike creates through his writing. I have previously reviewed Strange Medicine, and Strange Secrets and Nothing is Strange. Having already experienced Mike Russell’s stories, I began this one with an open mind and ready to jump down the rabbit hole. I knew before I started reading that it would be like nothing I have read before and I can say it is unique. 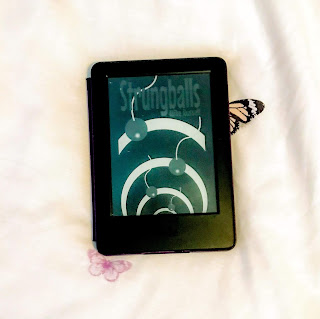 The story is revolved around Sydney, a boy living within a dystopian/futuristic community but all he knows is the corridors within his city, and the regimented robotic lifestyles he and his parents live. The city is protected by a barrier that keeps the monsters away so that the citizens can continue living their tranquil existence in their small world. Sydney world has identical rooms numbered from 1 – 999 which then brings it back to 1. The people who exist in this world seem very clinical and in routine, going to work or school daily and like clockwork, and in addition; the aspirations of most children is to work in the highly respected industries of Strungball sales or a Strungball advertising.

Unlike most dystopian/futuristic community this one donates flesh. when we met 10-year-old Sydney he is in one of the rooms that appears very clinical. It had to be he had proudly just had his first cube of flesh removed from his chest. It was for the good of the community. So, every so often these robots harvest a chunk of flesh from a person’s body. Cauterising it as they do so. Sydney doesn’t know why; it is just what is done in this city. After his operation, His proud parents then present him with his first strungball! Which is placed within the empty space where his flesh used to be. Everything is fine until Sydney learns of the ‘others’ and meets the man who has more Strungballs than anyone else. Through the first half of this book, Sydney seems to be happy, and proud that he has become a part of this tradition but then he thinks for the first time

The descriptions were minimal but it felt like an intentional move on Mike's part. Also, the characters seemed robotic and stereotypical in this city like they have all been brainwashed.  It makes the book seem very clinical and sterile, that they only focus was the Strungballs and their purpose.

I try not dissect Mike Russell’s stories they are just simply what they are the day I read them, tomorrow I will see something else in them. If you’ve seen my previous reviews of Mikes work you know that I loved his writing style. His ability to create such intense imagery in so little words still leaves me speechless like honestly, this book is only 66 pages! I know I shouldn’t be as blown away having previously read his work but it’s not the point he is a brilliant writer and deserves the recognition. I still stand by my view of Mike’s straightforward narrative paired with extremely odd and obscure subjects helped him create an enjoyable world.