I am continuing Terry Pratchett week with The Fifth Elephant. This is my second favourite Pratchett book.  This year for my birthday I asked for ReaperMan, The Colour of Magic, The Hogfather, The Fifth Elephant and Going postal in the new covers by Gollancz and Doubleday they are stunning. 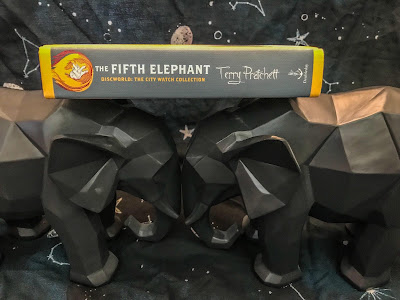 Now back to the elephant in the room. A strange theft and murder occur in Ankh-Morpork, and just as the Watch is about to investigate, Sam Vimes and his wife Lady Sybil are sent to Uberwald the land of vampires, werewolves, and Dwarves who rarely come to the surface to attend the coronation of the new Dwarfish Low King as ambassadors.

The rest of the Discworld has cottoned on to the potential wealth of resources that might be obtained by befriending the strange creatures that live there.  While street-hardened Sam Captain of the watch and  Duke of Ankh-Morpork, has to start learning about policies and the politics of the Discworld, Angua has disappeared and Carrot decides to hand in his resignation to go and find her, taking Gaspode with him to act as interpreter, unfortunately her trail leads to Uberwald, With Sam Vimes on his way to the coronation, that leaves Fred Colon as Acting Captain of the Watch. Poor Fred managed to annoy everyone and makes a general mess of everything. This is one of the more darker plot-driven books in the Discworld series, but the humour is still there. Sound confusing? It's not. At least, not yet.

Obviously, things start to go wrong immediately, and Sam is the perfect point of view on it all. His mix of practical cleverness, stubbornness, and slight cultural insensitivity make for an entertaining read.  It just so happened that the origins of the strange crimes in Ankh-Morpork also lead back to Uberwald and the coronation ceremony.  A fish out of water in a new land yet Vimes finds himself attempting to not only play politician and ambassador but also detective to find out the truth before the Dwarves are thrown into a bloody civil war and handling a tiny union strike back in Ankh-Morpork. Once in Uberwald, we see the family of Igor again, who are just so wonderful, they make me smile, the environmentally conscious nature by which they recycle body parts, thinking that they can be of use to someone else.

Cheery accompanies Sam and Sybil back to her homeland as a military diplomat and unfortunately her modern ways cause issues amongst the more traditional dwarves of Uberwald. Detrius the Troll attends as the cultural diplomat. however, in Uberwald the trolls and dwarves have been at war for over a hundred years. Then throw in Angua’s noble yet slightly psychotic werewolf family, oh I almost forgot to add the Vampire clan that’s on the wagon from drinking human blood.

Sir Terry mixes in lots of humour and action with thought-provoking themes and musings. Here we have fun with truth and diplomacy, eastern European folklore, royalty and conflict between orthodox and reform elements, as well as progressive politics Everyone is moving with the times, dragged kicking and screaming into the century of the fruitbat.

As well as having Terry's values interwoven throughout the story involves sexism and feminism, open-mindedness and acceptance, slow social change and the dangers of conservatism and racism. While featuring good people with good values who fight for each other and who stand up for what's right, even down to the very small stories.

I remember the first time I read The Fifth Elephant I was a little annoyed that once again we would be leaving Ankh-Morpork however it worked really well allowing Terry to introduce us to new characters and develop extra layers to characters we already know and love. Note to 15-year-old me trust in Sir Terry, you daft bat.