Today I am reviewing No cunning plan by Sir Tony Robinson I’ve just re-listened to the book on audible. I love The Blackadder reference in the title however I would have gone with “I have a cunning plan…” but that’s just me. I know I’ve jumped straight in talking about Blackadder first but let's be honest its what most people recognise Tony from but for me, my first introduction to Tony was Time Team. 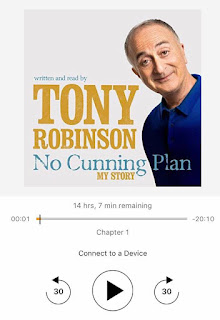 Little side note here I just checked when Blackadder came out yeah, I was only alive for the Blackadder Back & Forth special. Blackadder goes forth and that beautifully heart-breaking poppy finale was 4 years before I was born.

I thoroughly enjoyed reading this interesting and entertaining book. In this memoir, Tony fondly looks back at a career that has lasted over 50 years.  Starting out as a child actor, appearing as one of Fagin’s gang in the original stage version of Oliver! (Tony was initially just keen to have fun and get out of school) to the iconic Baldrick, he makes it clear there was never any cunning plan but he's enjoyed every moment of his very successful career. Tony has enjoyed a long and varied career as an actor, writer, presenter, the actor's trade union, and in local politics.

Tony spent many years acting and directing in some of the new breeds of theatres and companies that came out of the 1960s and 1970s. Tony also looks back at the times his life wasn't quite so plain sailing. He was bullied by Steve Marriott, failed to impress Liza Minnelli and was pushed into a London dock by John Wayne! He's also risked life and limb filming The Worst Jobs in History.

He writes openly and honestly about his life and its many ups and downs, which is refreshing to see. and how he comes through all these experiences smiling at the end. Tony is honest about his personal life and his parents’descent into Alzheimer’s. My eyes were opened to some of the projects that he had been involved in, as well as some of the people he had been involved with during his life so far. Tony clearly has a determined character and includes some very personal things like his drug taking, which I was surprised by. I was also unaware of his political career.

It’s really refreshing to hear such an honest view of life and that for most people there is no real plan. People just go along doing what they think is best at the time. Too many biographies impose a sense of ‘this is how I succeeded in life; you should do this too’. Tony was humble and honest in his experience, and it was refreshing.

This is a brilliant book and honest book for anyone who love Tony's work.