The Girl the Sea Gave Back by Adrienne Young


Hello Readers,
Thank you, Sarah and Titan Books, for sending me a copy of The Girl the Sea Gave Back by Adrienne Young for free in exchange for an honest review.
Publication day: 3rd September 2019

This is the second book I have read by Adrienne I loved Sky in the Deep although I am yet to review it. I am going to try to keep this as spoiler-free as I can. Also, just a little side note, this is not a sequel to the first book, however, if you have read Sky in the Deep, you can appreciate the development of the world, mythology and characters. There are little Easter Eggs for people who have read Sky in the Deep as we get to meet some familiar faces and enjoy the new dynamics between. 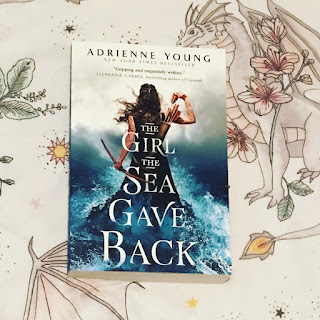 Adrienne took a topic that I am familiar with and took my hand and told me to run, it wasn’t long before I captivated with their way of life, their gods and beliefs and their struggle. This book made me think about the complexities of fate and war. Adrienne has shown characters who react to fate and war in realistic ways there is a whole spectrum of how each character responds to them which makes them feel that more real and believable. Adrienne’s writing is wonderful and there is such an atmospheric quality to her words that makes you feel like you’re living the story, rather than just reading about it. The battle scenes were brutal and extremely detailed and were easy to picture, I honestly enjoyed reading this book, the language and writing were magical, I couldn't stop reading I finished this book in a day.

The story was about Tova who was found at six years old on the shore by, Jorrund who became her surrogate father.  She was in a funeral boat that was partially burned out and it was obvious to him that she was a seer that casts runes and reads them.  Jorrund decides to use this to his advantage and tells her that she was a sacrifice to the gods by her people. She grew up thinking her people didn't want her, so she survives with a different clan and casts the rune stones for them

The Svell whom she lived with hated her for being the messenger of bad things so they mistreat her, yet Tova still worries about what the fate is telling her and she’s scared of screwing it up. The Svell treat her like the things she saw where her fault despite them asking for the readings, mostly during dire situations or in times of war. It is a wonderfully complex and intricate situation with Tova being an outsider wanting to fit in, while her “father figure” has raised her but also used her. Tova tries to do what is right and nobody wants to let her, and nobody ever stands up for her so it's easy to see why she is so conflicted and why she follows along with what the Svell wants.

Our two main characters, Halvard and Tova, were my favourite characters in the world of this book. I loved that Adrienne added the two perspectives and flashbacks as it was a delightful addition to the book. Their duelling viewpoints work well and both their character development was done marvellous and wasn’t lost with the two perspectives. Halvard fascinated me a little more but that’s down to the fact we were introduced to him in Sky in the Deep.

The ending was enjoyable and answered my remaining questions.  I’m just going to say again that I don’t think you have to read Sky in the Deep to enjoy this book. If you’ve read it then you’ll enjoy re-visiting or finding out what happened with certain characters, but these are minor aspects of the book.