The Nightjar by Deborah Hewitt


Hello Readers,
Thank you, Jamie, Tor and Pan Macmillan for sending me an ARC of The Nightjar by Deborah Hewitt
for free in exchange for an honest review.
I am going to try keep this as spoiler free as I can
Publication Date: 5th September 2019

I was lucky enough to be sent an ARC of this thank you again Jamie, Tor and Pan Macmillan, I honestly loved this book and its concept. I was utterly captivated by the world that Deborah created and I couldn't bear to put the book down! And I have already reread the book. 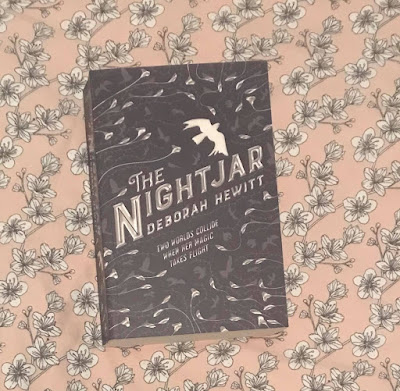 I thought the concept of this book was beyond interesting and I am so in love with the idea that there are guardians for our souls and only certain people can see. The story builds upon tropes familiar to the fantasy genre but does so in a way that feels fresh. Set in a modern-day and an alternative London, that is populated by people with special powers linked to water, fire, earth and air, magic hunters and our protagonist Alice Wyndham. Alice is an "aviarist", which means she capable of seeing nightjars the magical birds that guard human souls. I felt compassion for Alice right from the start and the writing style effortlessly drew me into her life as she discovered a hidden world called the Rookery.

This is a book full of magic, deception, betrayal, friendship, love and loss. The story had me gripped, and the characters were brilliant. I love the way the book began; I was immediately interested in the characters and what was happening. As we delved straight into a  dark mystery and suspense, which is a brilliant dramatic start to a novel and it makes it so hard to put down.  Throughout the book, we follow Alice as she navigates the Rookery, escapes the Beaks, and tries to find her way to the land of death.  Things are a lot more complicated in this alternate London that she initially thought. I also appreciate the Beaks and the history of the magic vs non-magic people. There is so much manipulation and deception going on, and chasing around yet the book manages to keep up with the pace.

Something that I appreciated in this book we how well the Rookery was thought out. You can tell that Deborah spent time thinking about this world and mapping it out. The writing style is fun and smart, lending itself to an easy read that has true depth. The magic system is stupendously explained and set up without feeling info dump.  The reader gets to experience the folklore, the culture, the history, and let’s not forget the death cult. It does end in a way that wraps up the story, and is bittersweet yet beautiful way, while also leaving it open just a smidge where a sequel could pick up.