Happy Halloween Readers,
Yesterday we looked at The Prince of Darkness, Dracula and today we are looking at the untold story of his Brides. We all know I love a good retelling and Dracula so imagine my surprise when I found out we were getting a book told from the point of view of Dracula’s Brides with the tagline Gothic, feminist and darkly provoking.

First of this book is absolutely stunning the gold detailing under the dust jacket is beautiful and the illustrations are beautiful. I also got my copy from Waterstones so I could have the red sprayed edges. 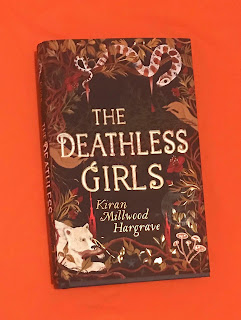 The Deathless Girls is the first book I’ve read by Kiran and it won’t be the last I thought her writing was beautiful. I enjoyed the setting for this story, returning Dracula to his Transylvanian roots and giving us some background for his brides and there’s a creeping dread, threaded throughout the book as the reader is aware of the story.

Kiran manages to create rich, lush feel even when she’s describing quite mundane, depressing situations. We know from the outset that things probably won't end that well for the sisters, but the journey to get there was gripping and full of folklore. It deals gracefully with the prejudices that would be experienced by the traveller community and by queer women while fleshing out the characters and paying homage to the original text. Kiran does not shy away from the book’s brutal world and the horror’s men can commit upon defenceless people. However, this is also a story of women and how they can support each other through terrible circumstances, which is wonderful to see.

The book was full of gothic atmosphere, but at the same time felt modern and fresh, It was very easy to fly through the pages and made for a very quick read. Kiran also does an excellent job writing the romantic storyline between two female characters. At no point did this feel forced and feels like a natural sub-plot.

The book follows twins Kizzy and Lil, Romani travellers, who on their 17th birthday are kidnapped and enslaved by the feared local lord, the Boyar Valcar. A journey that sees them have to grow up very quickly and learn to make tough decisions as they find themselves in the strange castle of Boyar Valcar until, on the orders of the Boyar, Kizzy is taken as a gift for Dracul. I honestly have so much love and appreciation for the Romani folklore in this novel and I loved learning about Kizzy and Lil background, their beliefs and culture.

The vampire aspect of the story isn’t quite as predominant as I thought it would be, but once you know that it is inspired by Dracula, you become aware very early on what’s going on and the danger the girls are in. As Lil journeys across the country to the land ruled by the man known as the Dragon, she starts to understand some of the rumours circulating about him. She learns he can turn people into Strigoi. For most of the book, the bond between the two sisters is far more important than vampires. It’s a story filled with mythology and legends, the legend of Dracula and vampires is an ancient one that is strikingly familiar for most of us but this story gives us an added layer to the complex mythology.

I am a big fan of a retelling let alone a feminist retelling I also love that this book has imagined the untold stories of characters in Stoker's famous novel.
Also look how stunning it looks next to Dracula!!! 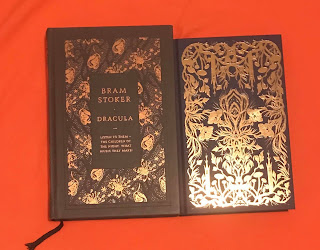