Happy Halloween Readers,
I put out a poll on both Twitter and Instagram asking if you guys would be interested in a true-crime week for Halloween you guys said yes so here, we are. This week I will be looking at Peter Sutcliffe, Ted Bundy, Richard Ramirez, Jeffrey Dahmer, Aileen Wuornos, John Wayne Gacy and Lizzie Borden.

Our first serial killer of the day is John Wayne Gacy also known as Pogo the clown. Obviously, a clown had to work its way in here what’s Halloween without a killer clown.  As with the other serial killers I have mentioned this week, I am still missing out the details if you really need to know you can do your own research. No copyright infringement is intended the photo is used for educational purposes. 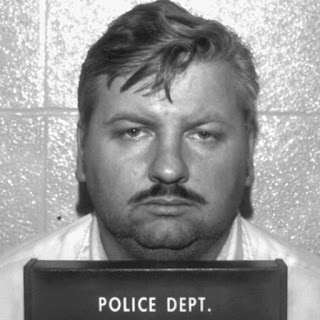 To many people, John Wayne Gacy was a friendly man who loved to entertain young children by dressing up as Pogo the clown. He was also considered by most to be a pillar of the community.

John was the son of Danish and Polish parents; John and his siblings grew up with an alcoholic father who would beat the children and their mother. John suffered further hostility at school as he was unable to play with other children due to a heart condition.

Despite the abuse, John admired his father and constantly sought his approval. In return, his father would hurl insults at him, telling him he was stupid and acted like a girl (Actual quote sorry). John later realised he was attracted to men, and experienced confusion over his sexuality throughout his life. When John was 7 years old, he was molested repeatedly by a friend of the family. However, John never said anything as he feared his father would find him at fault and as a result would be severely punished.

The first warning signs about John later behaviour showed in 1964 when he was found guilty of sodomizing two young boys. John was arrested and spent 18 months in prison. By the time he was released, John was divorced and decided to move to Chicago for a fresh start.

John worked as a fast-food chain manager before becoming a self-made building contractor and Democratic precinct captain in the Chicago suburbs in the 1970s. John volunteered as the Democratic Precinct Captain in his area. During this time, he threw elaborate block parties and built a solid reputation in his community. and was respected and admired by friends, neighbours, and police officers.

During July 1975, a teenager who worked for John disappeared. His parent’s pleaded with Chicago police officers to investigate John, but they never did. This would not be the last time worried parents asked officials to review John as a suspect, but the pleas fell on deaf ears.

Finally, On December 13, 1978, a search warrant on John’s home was granted. While investigators searched his home and cars, John was at the police station giving an oral and written statement about his activities. When John learned that his house had been searched, he went into a fit of anger well so would you if that’s where you hid 26 bodies under the crawl space and three others elsewhere on his property,

Eight days into the investigation the lead detective went to the victim’s home to bring his parents up to date. During the conversation, a receipt was mentioned. The same receipt was found in the evidence collected during the search of John's house. Further forensic tests were performed and proved John had been lying.

Those closest to John were interviewed by detectives on multiple occasions and John realised it was just a matter of time before the extent of his crimes would be exposed. John began to buckle under the pressure, and his behaviour turned bizarre. But what finally led to his arrest that day was a drug deal that was performed in full view of the surveillance team.

While in police custody, John was informed that a second search warrant of his home had been issued. Some of John’s employees admitted that John had paid them to go down into the crawl space to dig trenches. Which lead the investigators to the bodies during the search of his house.