Our second serial killer of the day is also the first woman I am looking at and it is….. Aileen Wuornos. Aileen is the third of the serial killers I am looking at that made an appearance on American Horror Story her appearance was in Season 5 (Hotel). As with the other serial killers I have mentioned this week, I am still missing out the details if you really need to know you can do your own research . No copyright infringement is intended the photo is used for educational purposes. 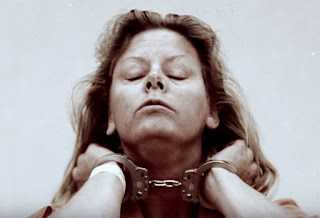 This post is more about Aileen’s life than her murders. I know there is no excuse for Aileen’s actions however her childhood was traumatic. Aileen’s childhood offers a compelling explanation for why she turned to prostitution and violence later in life. Wuornos's mother, Diane Wuornos, was only 15 or 16 when she gave birth to her, and her father was only a couple years older.

Diane abandoned Wuornos and her brother, Keith when Wuornos was only 4 years old. Aileen’s father was a psychopath and child molester who was incarcerated at the time of her birth; he eventually committed suicide. Aileen found prostitution early in life, trading sexual favours at school for cigarettes and other treats at age 11.

Diane abandoned Aileen and her older brother Keith, leaving them to be raised by their grandparents. Yet Wuornos’s grandmother was alleged to be an alcoholic and her grandfather a terrifying, violent force. While Aileen has claimed that she was sexually abused by her grandfather, who also allegedly beat her. In 1971, Aileen gave birth and put the baby up for adoption. By her early teens, Aileen had spent time at a home for unwed mothers and then dropped out of school and turned to prostitution.

In 1974 Wuornos was imprisoned for driving while intoxicated and for firing a gun from a moving vehicle. By the late 1980s she was a drifter and between 1989–90, Aileen was posing as a hitchhiking prostitute, to snare her victims.

In 1986 Wuornos met Tyria Moore at a bar in Daytona Beach, Florida, and they began an intense romantic relationship that ended just before Wuornos’ final arrest in 1991.  Together, Aileen and Tyria Moore sold stolen items at Florida pawnshops. During the investigations, Volusia County police discovered items belonging to one of the victims at a local pawn shop, with a receipt showing Aileen’s thumbprint. Police then managed to trace other stolen items to Wuornos and they traced other items from Mallory's car to people or pawnshops Wuornos had contacted.

By 1990 Tyria had become suspicious of Aileen’s activities and had moved in with her family in Pennsylvania.  When Aileen was arrested on an outstanding warrant in Florida, police tracked Moore down and used her to elicit a confession from Wuornos.

It didn’t take long for Tyria to flip on Aileen. In the days immediately following her arrest, Tyria was back in Florida, staying at a motel the police had rented for her. There, she made calls to Aileen in an attempt to elicit a confession that could be used against her.

Tyria acted up a storm, pretending to be frightened that the police would pin all of the blame for the murders on her.  She’d beg Aileen to go over the story with her again, to get their stories straight. After four days of repeated phone calls, Aileen confessed to several of the murders. Authorities now had what they needed to arrest Aileen Wuornos for murder.

Tyria got full immunity. However, Tyria and Aileen often talked by phone, and Aileen knew in general terms that her lover had turned as a witness for the state.

She was convicted and sentenced to death for six of the murders and was executed by lethal injection on October 9, 2002.