October 11, 2019
Happy Halloween Readers,
I put out a poll on both Twitter and Instagram asking if you guys would be interested in a true-crime week for Halloween you guys said yes so here, we are. This week I will be looking at Peter Sutcliffe, Ted Bundy, Richard Ramirez, Jeffrey Dahmer, Aileen Wuornos, John Wayne Gacy and Lizzie Borden. No copyright infringement was intended with use of this photo it is for educational purposes.

The second post today we are looking at Richard Ramirez who was also known as the Night Stalker. Richard is the first of the serial killers I am looking at that made an appearance on American Horror Story his first appearance was in Season 5 Hotel. As with Peter Sutcliffe, I am missing out the details if you really need to know you can do your own research. 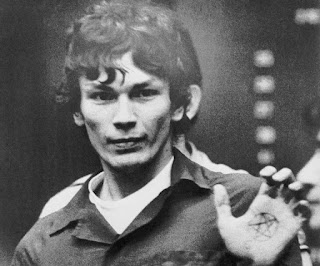 Let's get some facts out the way first

to say Richard had a rough childhood would be an understatement. To escape his violent father, Richard began to hang out with his older cousin, Miguel, a decorated Vietnam veteran. Richard was heavily influenced by Miguel and. Miguel told Richard about the torture and mutilation he had inflicted on several Vietnamese women, corroborating these stories with photographic evidence. At age 13, Richard witnessed the same cousin murder his wife. Witnessing the shooting turned Richard from a scared, abused young boy into an LSD user and developing an interest in Satanism, which he practised throughout his life.

Richard was arrested for the first time in 1977, at aged 17 for marijuana possession. He soon moved to California, progressing to cocaine addiction and burglary, and cultivating an interest in Satanism. Theft turned to violence with Richard's first known murder on June 28, 1984; the victim was 79-year-old Jennie Vincow, who killed during a burglary in her own home. What followed was a spree of brutal murders, rapes and robberies, leaving dozens of victims in its wake.

For 14 months, Richard travelled all over California, from Los Angeles to San Francisco, murdering and robbing. His victims were both male and female, ranging in age from 22 to 80. The one thing all of the crime scenes had in common was evidence that a Satanic ritual of some kind had occurred.

Random fact I always confuse with Richard Ramirez is that is the house was locked he wouldn’t enter, turns out that wasn’t the case. The serial killer I am thinking of is Richard Chase would try to enter homes at random, but would always leave if the door was locked.

Richard was captured on August 31 1985, after he was badly beaten by East L.A. residents while attempting two carjackings. Richard was formally sentenced to death in the gas chamber on November 7, 1989, and was sent to San Quentin Prison in California to spend the remainder of his days. Ramirez died from B-cell lymphoma at age 53 on June 7, 2013.