Just a quick little note from me before we jump in. I watched the Extremely Wicked film starring Zac Efron, with my friend and bless her at the end she said he wasn’t that bad. After a quick discussion, I filled her in on the details the film missed. I’m not too sure if she still had a high school musical crush or something else, I don’t know. I suppose it’s a good thing but I honestly don’t get the whole he’s handsome thing! Same with Charles Manson (too short sorry not sorry). No copyright infringement is intended the photo is used for educational purposes. 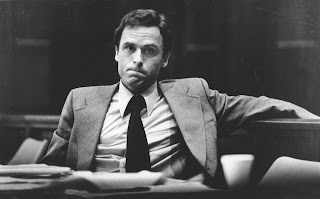 Ted had a slightly messed up childhood his sister was actually his mother and I’ve read that he could possibly be the result of incest I don’t know how solid these claims are of if they are a deformation. Even without the confirmation of incest it must have been life changing to find out your sister is your mother but that doesn’t give you the right to kill people.

In my opinion, Ted is the complete embodiment of a narcissist he thought he was Gods gift and used his charm and good looks to take advantage of 36 innocent women whose kindness was ultimately their downfall.  Ted confessed to 36 however the exact number of women Ted killed will never be known. Ted had a type he went for attractive students with long dark hair, he would usually approach his victims presenting himself as hurt and needing help. One of Ted's techniques for luring his victims into a false sense of security by putting either his arm or leg into a cast or using crutches.

Ted escaped police custody twice the first time, Ted acted as his own lawyer in the case during a trip to the courthouse library, he jumped out a window and made his first escape. He was captured eight days later. The second time he climbed out of a hole he made in the ceiling of his cell, having dropped more than 30 pounds to fit through the small opening. The Authorities noticed 15 hours later, giving him a big head start on the police.

Ted was executed in Florida’s electric chair in 1989.

Little side note I’ve watched too many Ted Bundy documentaries and have used the following sources to fact check.