Anyone got a sense of deja vu, do not panic today is a full review of Nightmare Scenario by Hazel Clarke. On 17th October I was lucky enough to have a stop on the blog tour.

Thank you again, Bookollective for inviting me onto the tour on behalf of Salad Pages and for sending me a copy of Nightmare Scenario by Hazel Clarke for free in exchange for an honest review. 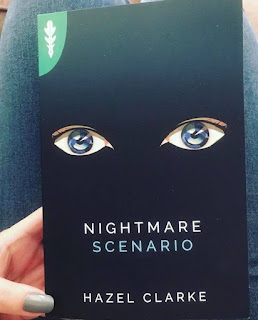 As soon as I started this book, I knew I was in for a special ride. This is one of them books that takes you by the hand and tells you to run. I think the blurb has done a wonderful job and provides a great overview without spoilers and spoon-feeding.

Our main character is Gracie Thrace, she is well developed and easily relatable. Gracie is 18-year-old and has just started university and living in a day and age where automaton housemaids are common in countless households. Without too many spoilers, the first and most important theme in this book is mental health and the second major theme deals with is the development of technology.

Mental health plays a huge role in Gracie's plight, bringing elements of schizophrenia and psychosis to light in an unapologetic and honest way. Hazel’s clever handling of this topic was brave and true but didn't deflect from an already fascinating tale.

IrukaTech makes and controls the Hourglasses that are installed on the wrists of everyone. Hourglasses are like a mobile phone however unlike out mobile phones, the tracking can’t be turned off, which means the police and IrukaTech can track any person at any given time. How scary is this thought like honestly? Just thing about it, I hardly ever have my location on my phone activated.

A mind-altering drug called Hydrobliss is being tested in secret by IrukaTech four human test subjects have been given Hydrobliss. Thanks to Hydrobliss and IrukaTech Gracie hears four voices in her head: Psyche, Eros, Kai and Terry, I love this homage to Greek mythology and good old Kai and Terry.

Both themes are dealt with beautifully and respectfully especially the metal health theme it was deep and emotional and you easily felt a connection to Gracie. Hazel’s writing constructs an engaging honest and raw story that envelops you in her dystopian world and through the unsettling times.