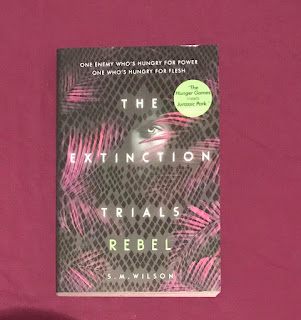 I am just going to say I have really enjoyed watching Storm, Lincoln and the gang setting up on Piloria over this trilogy and I think it has the potential to become a larger series but that might just be me being greedy.

If you’ve seen my reviews of the first two books you know how much I loved Piloria and wanted to stay there in a little hut/cave and play with dinosaurs and adored the wonderful bright scenery compared to Earthasia. I found the tropical setting once again magical and the idea of dinosaurs and humans inhabiting the same space both terrifying and thrilling.

Instead of a mission to Piloria and back this time they are sending ships from Earthasia to colonise the dinosaur continent which sets up an entirely different set of challenges for our beloved characters. Returning to the island was great because again it brought in some of those same practices where humans run things down and destroy what they don’t know or understand. There’s still conflict, which is well done and the political atmosphere is still tense.  It was nice to see Storm and the other survivors of the trial know what to kill yet be the strongest advocates for cohabitation. Storm in particular really seems to be coming into her own as she has had to step into more of a leadership and mediator role.

From start to finish, the story is engaging and full of emotion Wilson does dystopian so well. The opening chapters grab you and tell you to run the chaos is fascinating and the tension is palpable it is a great piece of writing and it is executed beautifully. There is sadness and anger, mixed with happiness and hope and just pure intensity the entire way through. I ended up feeling for the characters and rooting for them and enjoying their complex character and relationship development. I had no idea how this book was going to end it could have gone in any direction and I love how there is no indication which way it's going to go.