Seeing as the new animated Addams family is going to be released to DVD soon, I thought I would finally share my views on the new version and the classic and I may even bring up the musical (YES, I said musical). 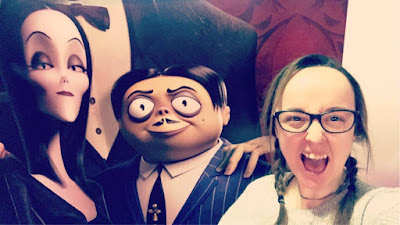 First off, I actually liked the new animated version and saw it twice. You can call me a soppy cow but I liked the added bit at the beginning with the Wedding and with the Queen that is Christina Aguilera singing Haunted Heart was a beautiful touch. Let’s be honest we all love watching the Addams family be ghoulish because deep down we know they’re loving, decent and fiercely loyal to each other.

I also have a theory; this is a shower set the world to right theory but…. Almost all of Addams families fit into one timeline. What!!! I hear you cry! Take my hand and follow me down the rabbit hole, you ready?

So, in the original series, Wednesday is a young child. Then comes the 2019 movie where she is a pre-teen. Followed by the live actions (we are ignoring the Tim Curry one sorry not sorry) which let’s be honest is a full teenager. Then the musical which I think is very late teens early twenties. Comment down below if you think I’m crazy.

Okay so back on track.
The film places the Addams in the present day and modernises the mob mentality this poor family usually faces. Instead of pitchforks and torches, we have moved into paranoid online neighbourhood watch groups run through mobile phones. The usual themes follow about being different and being seen as odd.  The morbid awareness of the Addams family compared to the normal boring dull everyone is the same neighbour equals

One thing I have always taken from The Addams Family is that’s it's okay to be different and this film highlights this beautifully. This new movie still has its dark themes, Morticia using an Ouija board and crystal ball to talk to her parents, Pugsley attempting to kill Gomez, Wednesday shooting arrows at Uncle Festers. Oh, and slight spoiler the IT joke well played guys, well played. I also love the nod to the headless horseman with a tree names Ichabod, Along the lines of great names Wednesday pet being called Socrates is brilliant.

Also, all the way back in 2010 there was rumours that Tim Burton was set to co-write and co-produce the film, with a possibility to direct a stop-motion movie. But in July 2013 however, it was reported that the film was cancelled. Hey, people in charge please make this happen giver Tim free reign.