I would love to say a huge thank you to BKMRK and Hachette for not only sending me a physical ARC copy of Only Mostly Devastated by Sophie Gonzales but for inviting me on the blog tour. 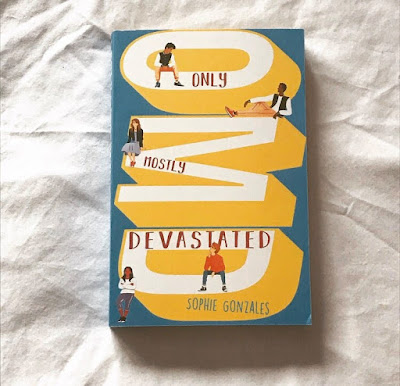 First, off I’m not going to lie I saw the words queer re-imagining of grease and lost my mind and it was on my Wishlist. I read this in two sitting I just has to know and who doesn’t love a book that does that. Waterstones has it summed up beautifully “SIMON VS THE HOMO SAPIENS AGENDA meets a modern-day, queer re-imagining of GREASE.”

Just a little editor’s note the next three reviews are all out fangirling sorry, not sorry!

I am also going to try to keep this spoiler-free and can I just say the spoilers are GREASE based so what can I say? and one spoiler is Love Simon based, if you know you know.

If like me you were raised on GREASE you are going to be hit right in the nostalgia feels as the story is recognisable (also if you’ve not seen GREASE spoilers and if not go watch it). This book drew on the overall concept of Grease and some scenes and characters are reminiscent of the original but this is still its own story, it is like seeing an old friend.

Ollie and his parents moved to North Carolina from California for the summer after his aunt became ill (Our Sandy). He spends most of his summer at the beach, taking care of his young cousins. There he meets Will and Ollie and Will have a summer fling. It's intense and passionate but once the summer is over Ollie is baffled by Will's silence no calls, texts, nothing. (Oh hi Danny!).

As if that's not enough for Ollie to deal with, his family has decided to stay in North Carolina to help care for his aunt for a year. Which means poor Ollie has to start a new school for senior year. Obviously, he ends up going to Will's school (are you loving it yet). It doesn’t take long for Ollie to discover that it's the same school Will attends, which is fantastic (Skip the next paragraph here to be spoiler free) until he discovers that no one knows Will is gay, and this version of Will isn't someone that Ollie likes he is the complete opposite of the Will Ollie meets.

Ollie is befriended by three girls who kind of take him under their wing. These characters added a depth to the story and I love how relatable issues are.  Let’s be honest I’m biased but Ollie is the kind of narrator who is all fumbly with all the unfortunate moment's life throws at you and has the brightest heart of gold and he's a lovable dork. I love him. It is kind of painful in bits as Ollie doesn't deserve to be an afterthought no one does. But saying that I thought Will was created so well, particularly when he was being an asshat and as much as I hate to say it I can understand why.

I think this book does a wonderful job of representing what it's like to be LGBT+ and closeted, openly out and confused. There was so much aching and longing and fear held within this wonderful book’s pages. It feels real, yet well handled, and you can’t help be enveloped by the story.

This book also looks at family grief and the anxiety of watching someone dying. Please don’t think it is all doom and gloom there were so many pages that had me laugh out loud. I am a huge fan of when an author knows how to do the cute funny scenes, but can jump into serious moments just as well and Sophie has done it wonderfully.

Do yourself a favour and pick up this book

Thank you again, BKMRK for the ARC and tour invite 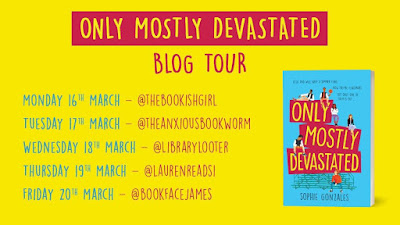