I would like to say thank you Pixie for sending me both an advanced ebook and physical copy of Kill or cure: Oblivion

I am keeping this spoiler free till the 6-month point and then I’m letting it all out this is your warning. 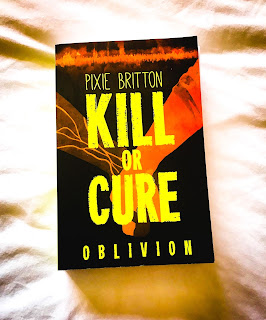 First off seeing as this is the end of the trilogy, I would be lying if I said I wasn’t a little sad, it doesn't help that this trilogy is special to me. Kill or Cure was one of the first books I got approved for on NetGalley when I became a book blogger so I’m a little attached. Here are my reviews of Kill or Cure and Kill or Cure: Bloodlust if you need a catch up. Warning once you start this book you are quickly swept back into the world and once the book has its grip on you it doesn't let go.

Alyx is seventeen and despite all the events from the first book and second book you can still tell she’s a teenager. You can tell she’s had to grow up a lot but unlike some dystopian books where you don't need to remind yourself about the age of the main characters. Heads up this is an emotional rollercoaster of a finale I was right there with the gang I laughed, I got angry and I got more attached to a dog than I thought possible (if you know you know).  One thing I will say there are some brilliant character arcs in this book that were done wonderfully and, in a way, the felt real which is a testament to Pixies writing.

I love Alyx’s character growth she’s still kickass but even more so as she has to protect her brother Tommy and with Pixies writing you’re right there with them, you are willing to fight for tommy and the gang. Alyx has been so strong throughout the first two books and her resilience and her ability to adapt is honestly inspirational. Thank you, Pixie for giving us a powerful yet relatable female lead throughout this series. Anyone needs an update the virus still hasn’t consumed Tommy. General Sinter is such an interesting character your emotions towards him are palpable. Also for the record I am against violence but I wouldn’t slow down my car to miss him if he was crossing the road.

Pixie’s writing is wonderful you really are buckled in for the ride you end up fully suspending your disbelief and you become fully emotionally attached and you want to protect Tommy and the gang. Even after the previous two books I still don’t know how Pixie manages to keep the balance between the character and story development in a way that is effortless to read and it is honestly delightful to read. Also how she manages to keep the story growth composed and flowing while having this book set against a busy, fast-paced world is remarkable.