I would like to say huge thank you to Murray for allowing me to be a Beta reader and for also gifting me a copy of Singapore Killer in return for an honest review. Being a beta read in no way affect my ability to give an unbiased review.

I beta read this back in November as I am lucky to be one of Murray's Beta readers, I am so excited to be able to share this review with you now but it’s going to be spoiler-free! Also here’s a link to the first book in the series if you want to go down that rabbit hole. 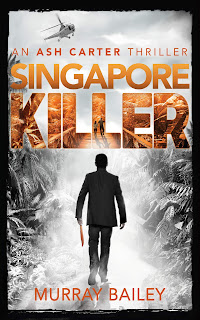 So first off, I might be a little bias I love a good cult and I love a good serial killer and this book deliver both in a fast-paced action-filled book. As you will see by my review, I have a slightly unhealthy knowledge of serial killers so sorry in advance.

This book goes straight into the action like seriously first page you are in the middle as Ash is called in to investigate a helicopter crash. As always, the investigation isn’t as it seems and is interconnected with numerous murders by a serial killer who has given himself the moniker Black Jack. Ash finds himself deep in the jungle as his quest for the truth slowly unfolds. This leads Ash to find and then going undercover at commune composed of ex-soldiers called Shangri-La. As with many “Normal” communes in the jungle secrets and lies are soon exposed. I really enjoyed this part of the story as mentioned I’m possibly biased but it adds a very nice build-up and you can also feel the tension and uneasiness in the compound grow.

Murray has once again created a delightful cast of characters that the reader either likes or dislikes for all the right reasons including the ‘bad guys’. I say ‘bad guys’ I guessed five possible Black Jacks. Special mention for Ash’s ‘receptionist’ Madame Chau she was just fabulous and I adore her but she kinda scares me like that crazy aunt everyone has. Her and Ash’s working relationship was wonderful to read and explore I hope to see more of it. Also, just to add to all this fun and games Ash is trying to make a living and is forced to take small jobs, like looking for a dog for a bored housewife.

Let’s talk about the other main man, I love Black Jack and his wholesomeness as a character he’s remarkably believable with reflections on Jeffery Dahmer, Ted Bundy, Jack the Ripper with a need for his ego to be stroked like Zodiac and Smiley Face Killers. He is magnificently bad and he’s a good bad guy there’s honestly no redeeming or nice qualities in him. The only titbit you’ll get is I really liked the occasional chapters from his viewpoint.

This is my favourite Ash Cater book yet (Sorry Murray) as this book twists and turns and the body count rises as the hunt for Black Jack reaches its climax. You can’t help but encourage Ash along and warning you are going to feel everything he does. Another well-written book by Murray with strong characters and luxurious descriptions. I can't wait for Singapore Fire.

There is only one question left, Who is Black Jack? 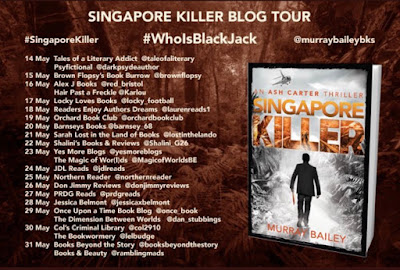