I have a confession I am honestly the biggest Scooby-Doo fan. Not so much in the buying of merchandise more that I have seen almost every Scooby-Doo movie made even the supernatural cross over. Due to Covid Scoob! Went straight to digital download not going to lie I’m not even mad about it as it saves a huge delay *cough* Mulan *cough*.  I can see some of you rolling your eyes yes, it’s another film review but it’s my happy place at the minute and my anxiety doesn’t seem to spark with film reviews.

I am using poster images I have found through google I do not own any rights and am using the image purely for future review purposes (Fair use under the copyright act sections 29 and 30 under use for a review). Get ready for the nostalgia 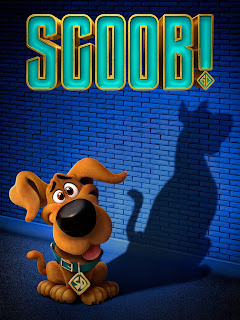 So, buckle up and let's jump into the Mystery Machine (Yes, I went there!) let's go, gang!!

I will be honest I went into this film with little hopes. I love Mathew Lillard as Shaggy and was a little grumpy see he wasn’t reprising his role however I am a Will Forte fan and I gave him the benefit of the doubt. He wasn’t that bad and I actually loved the movie. Who voice who in the mystery gang I hear you cry well I've already mentioned Shaggy, Fred is voiced by Zac Efron, Daphne is voiced by Amanda Seyfried, Velma is voiced by Gina Rodriguez and Scooby is voiced by the legendary Frank Welker.

There are so many nostalgic Easter Eggs they hit you like a boxing match. I've seen it twice already and I am still sure I missed some. From Captain Caveman (If you didn’t do it in the voice you can leave), Dick Dastardly and his companion Muttley. You’re going to have to watch yourself to see the others (Jinkies).  Also, puppy Scooby is adorable and the same with the gang they're so cute! To age up the young characters we get treated to a shot-for-shot recreation of the original title sequence it like hearing the opening music to Lord of the Rings it’s a welcome home.

This film has such a great and a fun premise without stepping on the toes of the original Blue falcon and Scooby-Doo cross over (2012). I know I’ve mentioned the nostalgia but it really is enjoyable to see some older characters brought back with faithful performances which offer genuine laughs. I shamefully had to google some of them because I recognised the character but forgot the name.

Let’s talk about the other main man the villain himself (Zoinks) Jason Issacs is a brilliant Dick Dastardly and I now can’t picture (or is it hear) anyone else in that role he was honestly the embodiment of what I remember from my childhood and I think if I was younger he would actually scare me. The only complaint I have is purely on my side and that is my dumbass decides to keep humming “Catch the Pigeon” once is there is never leaving.

I think for me Scooby Doo has a special place in my heart and I might be biased but I grew up watching Disney or Scooby-Doo. So I’m a little protective and a little rose-tinted but most of us are with our childhood movies. I honestly hope this is a breath of fresh air into the series and I can’t wait to see any other movies that come out.

What is you favourite Scooby-Doo movie?

Mine is Zombie Island and Scooby-Doo: The Movie