Here I am with a review of Hamilton on Disney+. I am one of the unlucky few it seems in my friendship circle who hasn’t seen Hamilton on stage and today I realised why everyone loves it so much.

I didn’t go in completely blind I have listened to a couple of the song and knew a some of the lyrics. Also, I knew random songs such as the shout outs in Guns and Ships. Not as well as I know Beetlejuice but hey ho enough to get the stare from Mother Goose.

One of the biggest things I loved about this production was that it was filmed beautifully and transferred from stage to screen effortlessly which isn’t as easy at it sounds. Also, I currently have so much love for all the YouTube videos pointing out things that I missed and hidden details.

I have seen the term “the (Hamilton) musical has become over-hyped” and I completely disagree. There is nothing over-hyped about this musical it lives up to its now legendary status. The songs are amazing in their own right but let us just talk about the legendary speed of said songs Satisfied fastest verse hits 5 words a second while Guns and ships hits NINETEEN! words in THREE seconds! If that isn’t legendary, I don’t know what is.

One thing that stuck with me was Anthony Ramos doubled-up characters. In Act one he plays Laurens, however, in act two he plays Hamilton’s son Phillip. Without spoilers, this is beautiful and such a pleasure to watch and the feels.

I haven’t forgotten the Schuyler sisters, who have some of the best numbers and kinda steal the show. Lin-Manuel Miranda weaves the strong story-line of revolution into a tale mixed with courtship, marriage, friendship and adultery. Angelica Schuyler is a freethinker and a feminist controlled by the narrowness of the options available to women of her time and class. Her sister Eliza who marries Alexander isn’t reduced to a passive, suffering figure by the emotional richness of her songs. And Peggy!!

I would recommend doing the opposite of that I did, you have no excuse if you have Disney+. Watch the musical then listen the soundtrack. I may not have listened to all the songs but the ones I had gained much more from me being able to see them.

Nothing can compare to seeing an actor give everything they have on stage but this recording has translated it beautifully. Go on go watch it you know you want to. 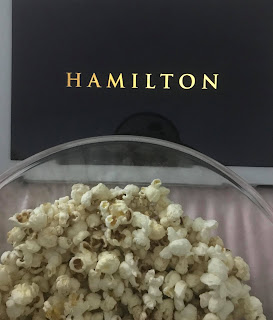